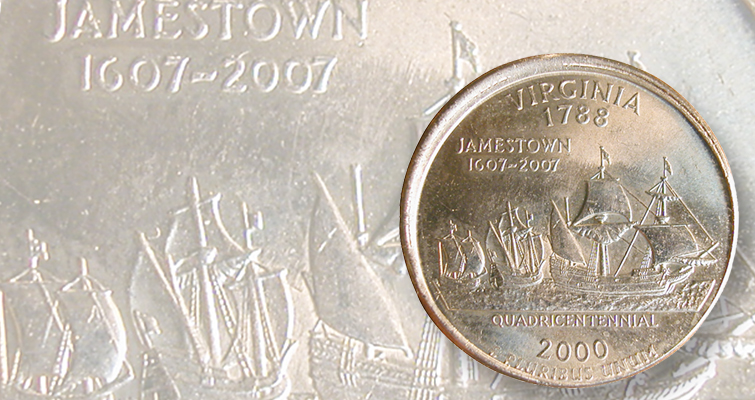 This 2000-P Virginia quarter dollar displays horizontal misalignments of both the hammer (reverse) and the anvil (obverse) die. 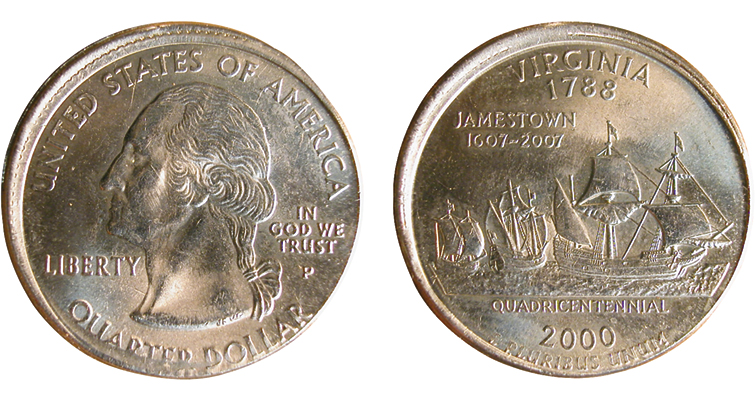 A closer look at both sides of the 2000-P Virginia quarter dollar that displays horizontal misalignments of both the hammer (reverse) and the anvil (obverse) die. 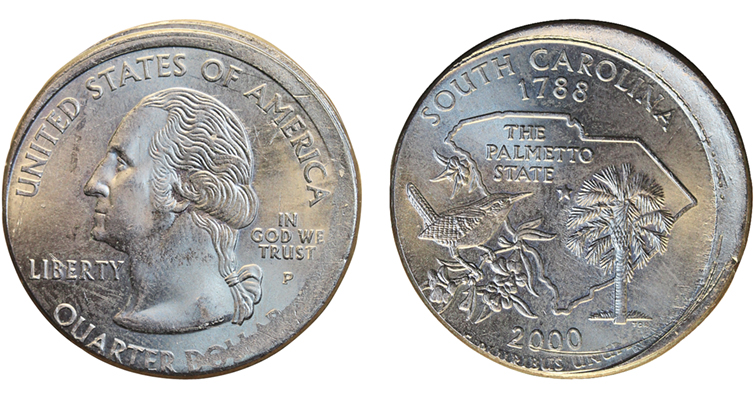 This 2000-P South Carolina quarter dollar also features a dual misalignment. Both misalignments are greater than in the Virginia specimen.

Now, an even more dramatic dual misalignment has emerged, this time in a 2000-P South Carolina quarter dollar.

The obverse — struck by the anvil die — shows an 8 percent misalignment toward 7:30 (obverse clock position). The reverse — struck by the hammer die — shows an 11 percent misalignment toward 7:30 (reverse clock position). In State quarter dollars, a shift toward the southwest characterizes many misaligned reverse (hammer) dies. Since the South Carolina coin was struck in normal coin rotation, the two median axes defined by the two misalignments cross each other in vertical space at a right angle.

As with any error that incorporates a misaligned anvil die, the coin was broadstruck. While there is no trace of reeding anywhere along the edge, the northern end of the obverse face does feature a strong collar scar.

The question inevitably arises — is this really a dual misalignment or only a facsimile? After all, we have three potential moving parts — hammer die, anvil die, and planchet. Might we instead be looking at an off-center strike in combination with a horizontal misalignment of the hammer die? Such errors undoubtedly outnumber bona fide dual misalignments and include the subset of Virginia quarter dollar errors mentioned above as well as the 1999-D 5-cent coin featured in the Nov. 28, 2011, column.

The hammer die of the South Carolina quarter dollar is unquestionably misaligned because the obverse design is missing in the area that lies opposite the unstruck crescent on the reverse face.

Proving that the anvil die is misaligned takes a bit more thought and effort. The best clue lies along the obverse periphery at the pole opposite the unstruck obverse crescent. Here the letters of QUARTER are ever so slightly cut off along the coin’s edge. If this pattern of offset were the result of an off-center strike, then the peripheral letters directly across from it on the reverse face (SOUTH) would show the same effect. Instead, those letters are located at their proper distance from a well-defined design rim. Both words are bisected by the axis defined by the anvil die misalignment (a line that runs from 1:30 to 7:30 on the obverse), and since that axis is oriented 90 degrees to the axis defined by the hammer die misalignment (a line that runs from 1:30 to 7:30 on the reverse), we can be confident that the obverse design is independently offset from the reverse design.

Although struck many months apart, the two dual misalignment errors share some tantalizing similarities. In both coins the misalignments are 90 degrees apart and both display numerous accidental die scratches, with the vast majority appearing on the obverse face.

The South Carolina quarter dollar shows numerous other errors that speak to a difficult history.

(1) Low-lying areas of Washington’s head and neck are lost to die abrasion (whether accidental or intentional isn’t clear).

(2) On the reverse, the field around the palmetto tree and along the right perimeter shows a patchy field-restricted struck-through error that reflects the presence of a gritty paste on the hammer die face.

(4) Multiple impressions of the die’s rim gutter are seen within the unstruck reverse crescent at 4:30.

(5) A curved groove that cuts through UNUM and the date appears to represent post-strike die contact. 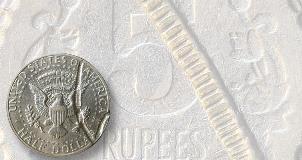 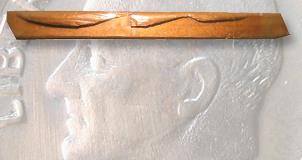 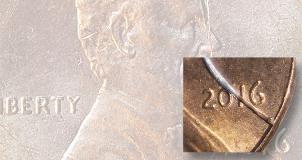