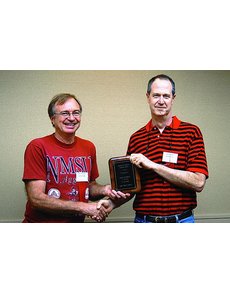 The Curto Award, presented annually by the NTCA, is named in honor of James J. Curto, pioneering exonumic author and cataloger. The purpose of the award is to encourage excellence in the research and cataloging of trade tokens and is presented each year for the best book on tokens published during the previous calendar year.

Henderson won the award for his book titled Iowa Trade Tokens, published in 2010 and printed by BNR Press of Port Clinton, Ohio. The 8-inch by 11-inch hardcover volume catalogs more than 25,000 merchant trade tokens issued in the state of Iowa, is over 800 pages in length, and features more than 6,000 photographs. The book can be ordered from the author by mail at 2955 Longbow Loop, Las Cruces, NM 88011, or by email directed to ghenderson49@gmail.com.

The National Token Collectors Association was founded in 1996 to promote the hobby of collecting tokens, medals and other forms of exonumia. For more information on NTCA, visit the organization’s website at http://tokencollectors.org. ¦