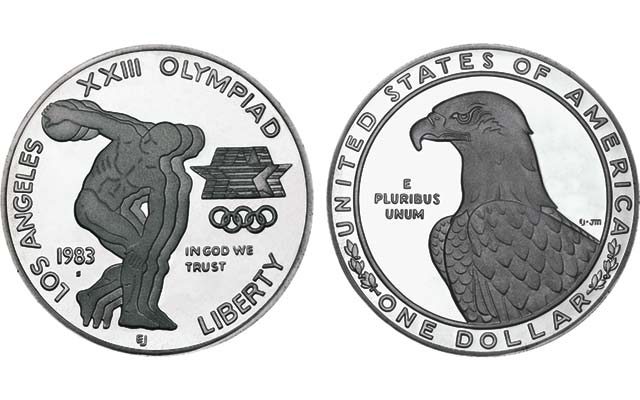 What might have been but wasn’t: 1983 and 1984 Olympics commemoratives distributed solely by the Occidental Petroleum Co.

Margo Russell, who served as Coin World editor from 1961 to 1985, attended the annual summer conventions of the American Numismatic Association and many other events as well.

Margo attended each of the ANA Roundtables. These were the brainchild of ANA President Virginia Culver. The first was held on May 14, 1974, and was titled “Problems-Projects-Priorities.”

About two dozen hobby leaders were invited to join the ANA Board of Governors for a day-long, in-depth discussion, followed by a nice dinner.

I also attended each of the six held over a period of years. Everyone benefited greatly.

In 1982, Treasury Department and U.S. Mint officials made grand plans for a series of commemorative coins to be dated 1983 and 1984 for the Summer Olympic Games to be held in Los Angeles the latter year.

United States Mint officials were enthusiastic beyond belief, as the 1982 George Washington commemorative half dollar — the first such coins since 1954 — had been a smash success with collectors.

Then the unexpected happened.

In 1982, Armand Hammer, chairman of the Occidental Petroleum Co. and one of the most celebrated figures in American finance and oil at the time, was a close friend of powerful U.S. Sen. Alan Cranston from California.

Hammer persuaded Cranston to influence other senators and those in Washington that if Occidental could take over the marketing of these and any future commemoratives, the publicity would be better, and far more coins could be sold than a “sleepy” government agency could sell.

The idea caught on. It seemed to be a win-win situation.

The Treasury Department reached out to Margo Russell, me, and several others who were prominent in numismatics and invited us to testify on its behalf to the Senate.

We did this, the Occidental threat was averted, and the rest is history.

It was either on this trip or another to Washington that we were invited to visit with President Ronald Reagan at the White House.

Somewhere, I have a nice letter from U.S. Treasurer Bay Buchanan thanking me, and no doubt the others received them as well.