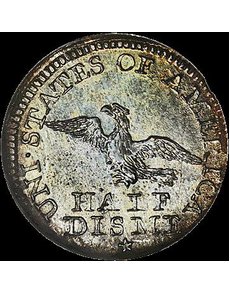 Reverse of a late-state 1792 half disme shows evidence of die rust, manifesting as pits on the die and tiny raised spots on the coin.

The enigmatic 1792 half disme has puzzled numismatists for more than 220 years, but now — with your help — we are solving its mysteries.

At the recent American Numismatic Association convention near Chicago, the authors presented findings from two years of intensive research on the coinage of 1792, focusing on half dismes, the first coin struck under the authority of the U.S. Constitution.

Since the 1830s, there has been controversy over when and where the half dismes were struck. The records made in 1792 have since been lost, but various sources, recorded years later, advanced two different conclusions.

One set of sources held the half dismes were stuck prior to September of 1792, before the Mint was ready for operations, in the cellar of a saw maker named John Harper, at the corner of North Sixth and Cherry streets in Philadelphia. The second set of sources held they were struck early in October 1792, at the Mint on North Seventh Street.

In 1966, numismatic scholar Don Taxay seemed to settle the “when and where” questions when he found an entry in Thomas Jefferson’s Memorandum Book that Jefferson had received, on July 13, 1792, “1,500 half dismes of the new coinage.” Sometimes, however, important evidence is invisible because it lies in plain sight.

When the authors began examining the coinage of 1792, we decided to systematically read all of the pertinent literature and closely examine as many surviving half dismes as possible. Both of these searches yielded important “plain sight” information that settles the “when and where” debate. We found little-known written sources quoting records made by the first chief coiner, Henry Voigt, stating that the half dismes had been struck in the Mint on Oct. 9, 1792. Voigt’s records are now lost, but were quoted in books such as James Ross Snowden’s A Description of Ancient and Modern Coins in the Cabinet Collection of the Mint of the United States and John S. Dye’s Dye’s Coin Encyclopedia.

Then we thoroughly examined as many of the 250 surviving half dismes as we could. All were struck from a single pair of dies; the obverse die remained unchanged throughout the run, but the reverse die changed significantly.

We have identified four different reverse die states, with two sub-states each of states 1 through 3, and a single state 4. Most of the differences are subtle, but between die sub-states 2-A and 2-B, something dramatic happened.

It follows that the dies were first used to strike half dismes of die states 1-A, 1-B and 2-A; put away for a period long enough for the reverse die to rust; and then reused to strike coins of die states 2-B, 3-A, 3-B and 4 (in die state 4, much of the rust on the die was obscured by polishing).

The different die states confirm the hypothesis we drew from the literature: two different strikings of half dismes occurred, separated by nearly three months’ time.

In order to maximize what we can learn from these coins, we are asking for your help. If you own a 1792 half disme, we ask that you share with us a description of your coin by grade and by appearance; any information you have about its previous owners, or auctions in which it has appeared; if the coin is certified, its certification number, and the company that certified it. Please send this information to: petesmith1793@gmail.com. All information shared will be held in complete confidence.

Although much has been learned about 1792 half dismes, much more remains unknown, and even less is known about the other coins of 1792.

We look forward to publishing all of our findings as a book titled 1792: Birth of a Nation’s Coinage, under the banner of Heritage Auctions, as soon as we unravel as many mysteries as we can. We appreciate your help in completing our research.

Len Augsburger, Joel J. Orosz and Pete Smith are all longtime numismatists and authors. Their Guest Commentary is based on their Numismatic Theater program at the recent American Numismatic Association World’s Fair of Money.