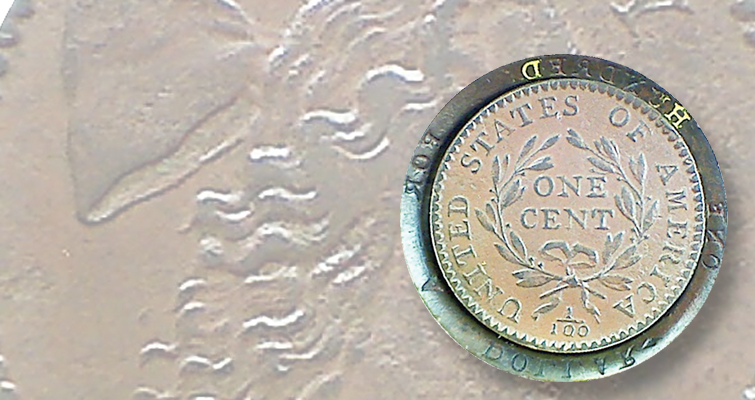 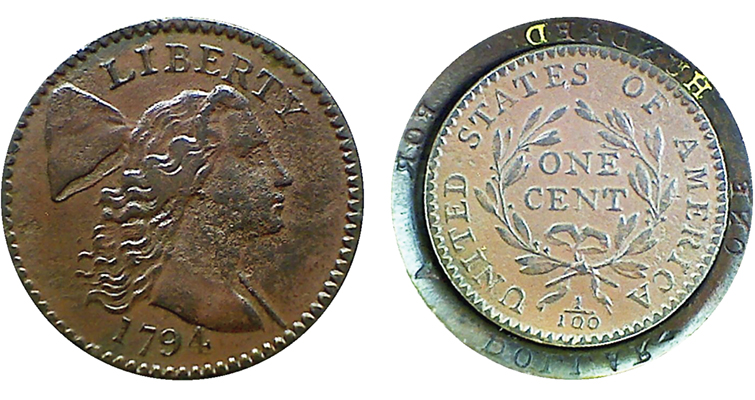 Collector Homer Downing pedigreed coins to his collection by using yellow paint to mark his initial HD from the first and last letters in HUNDRED on the edge device as shown on this 1794 Liberty Cap, Sheldon 47 cent. 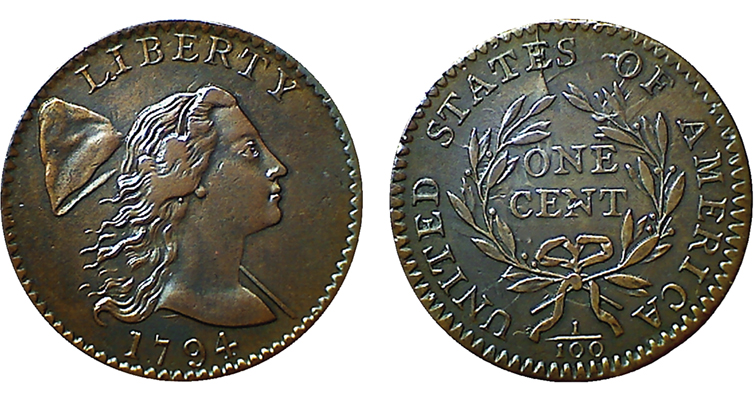 The Very Fine Sheldon 26 variety acquired in 1996 triggered Heck’s quest for all 1794 varieties by Sheldon attribution. 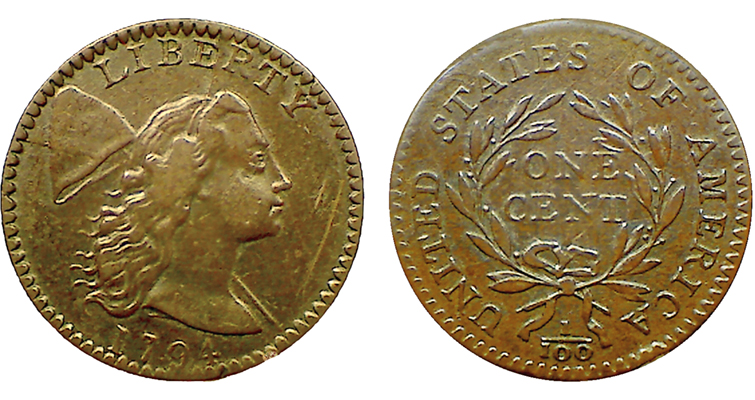 The Fine 15+ 1794 Sheldon 35 coin in Heck’s collection is the discovery piece for the variety. 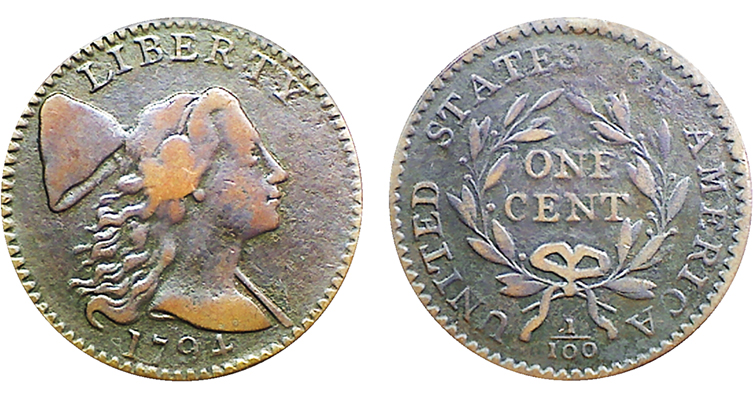 The Very Good 10 1794 Sheldon 36 cent is pedigreed to having once been owned by renowned numismatist George H. Clapp.

Florida collector Chuck Heck has been a numismatic hobbyist for more than 50 years, dedicating his focus primarily on United States large cents.

For nearly two decades, Heck has concentrated his acquisition efforts on the die marriages of 1794 Liberty Cap cents.

Now, Heck says, its time for him to part with his cherished coins and see that they find homes with collectors who will enjoy owning them as much as he has.

Heck’s collection of 1794 Liberty Cap cent die marriages by die states, many with prominent pedigrees, will cross the auction block Feb. 12 in a sale conducted by Ira & Larry Goldberg Auctioneers.

“This is not a sad time,” says Heck. “It is simply my time. I get to see my collection go to my close friends and it is being sold by close friends. I have had the pleasure to walk this journey with giants.”

Heck’s 1794 cent collection totals 103 coins, with at least one of each of the 58 numbered Sheldon die marriages as attributed in Early American Cents (later retitled Penny Whimsy) by William H. Sheldon. There’s also an example of the “semi-unique” noncollectible NC-4 variety.

Heck’s collection was cataloged by Bob Grellman and Chris McCaw­ley, The Copper Specialists.

Heck was bitten by the numismatic bug early in life, at the age of 8, when his father passed on his coin collection to him that included two large cents and a Colonial coin.

Heck was introduced to the Early American Coppers club in 1974 by collector Roy Rauch, and joined the EAC ranks the following year.

Heck has served six years as EAC treasurer and is the current vice president.

Heck credits noted collector, researcher and author John W. Adams with introducing him to the nuances of 1794 large cents. A number of coins in Heck’s collect­ion were once among Adams’ holdings.

Heck accepted the challenge of acquiring representative examples of all 58 Sheldon marriages of 1794 Liberty Cap cents when he purchased a Sheldon 26 example at the 1996 EAC convention in Philadelphia.

The coin’s lot description for the Feb. 12, 2017, auction by the Goldbergs identifies its condition as Very Fine 25.

At the 2001 EAC convention, Heck teamed up with fellow EAC members Bim Gander, Dan Trollan and Jon Warshawsky to form the Boys of 94 — an assemblage of large cents collectors with an affinity for 1794 cent marriages.

It was then that die states and pedigrees began to hold special meaning for Heck.

“Purchase a nice-looking coin and you are likely also purchasing a piece of history that comes with an interesting pedigree,” he noted.

Heck explains that nine coins in his 1794 large cent collection carry the Adams pedigree. Eight of the nine coins were included in the 1982 Adams fixed-price list prepared by Bowers and Ruddy Galleries.

Six coins in Heck’s collection were once in the famous William Wallace Hays Collection, and some of those are plated in Hays’ 1893 book on 1794 cents.

Heck’s Sheldon 35 die marriage, described as “Fine 15+,” and his Sheldon 53 coin, “Very Good 10,” are identified as “discovery specimens” as the first examples identified in their specific die combinations.

Three coins have yellow paint embedded in the H and D of HUNDRED in the lettered edge, indicating ownership by the famous Homer K. Downing (the letters, of course, representing his initials).

Seven coins have white paint markings around the edge that were used by W.W. Hays to indicate Dr. Edward Maris’ attributions for pieces in his collection.

One coin, the Sheldon 36 coin, described as “Very Good 10,” has the George H. Clapp pedigree, which is very difficult to obtain, according to Heck.

For example, the Heck Collection contains three examples of the rare Sheldon 66 marriage.

It is called the “Split Pole” because, in a later die state, a die crack develops parallel to Liberty’s pole thus giving the impression that the pole has split in two.

Heck’s collection includes the rare perfect state with no die crack, a mid-state example with a very thin die crack, and the late die state with a thick die crack.

“I simply could not resist the perfect state,” Heck said. “It was in Norman Stack’s personal collection and I needed a Norman Stack pedigree. Plus the Stack’s firm was THE PLACE to go in New York City for great coins when I was a kid.”

Heck also makes it very clear that the coins have brought more to him than the pleasure of ownership.

“I got lucky! I spoke to [professional numismatist] Tony Terranova and he gave me the best advice on how to focus my collecting interests,” Heck said. “Having coin dealer friends like Chris McCawley, Bob Grellman, Doug Bird, Steve Ellsworth, Greg Hannigan, Mark Borckardt, Vicken Yegparian, John Kraljevich and so many others certainly made collecting easier. And having collector friends like John Adams, Jack Robinson, Walt Husak, Al Boka, and Denis Loring — five really crazy 1794 collectors — well, that helps, too!

“And you get to know the research people like Del Bland, Ralph Rucker and Craig Sholley; the bibliophiles like Jim Neiswinter and Jan Valentine.

“You put into the mix all the Boyz of 94 — well, it simply comes down to great friendships.” 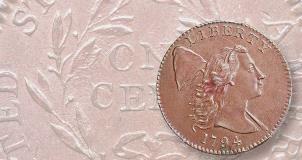 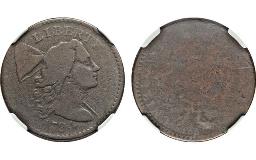 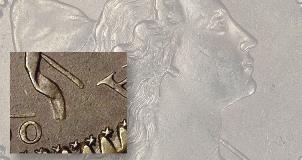