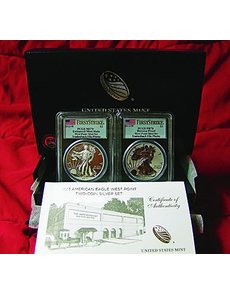 The first 2013 American Eagle West Point Two-Coin Silver sets have entered the market on eBay, such as this set with certified Professional Coin Grading Service Proof 70 and Mint State 70 First Strike coins being offered at $379.95.

The first 2013 American Eagle West Point Two-Coin Silver sets have entered the market and those who purchased sets in the first few hours of release are being rewarded with modest gains.

The presale market in June for sets with ship dates from the U.S. Mint that ran into early autumn was at the $165 level. The first in-hand sets ready for immediate delivery on eBay sold on June 24 at the $180 to $190 level.

The two-coin set marks the 75th anniversary of the West Point Mint as a Mint facility and contains the new Enhanced Uncirculated 2013-W American Eagle silver dollar and a Reverse Proof silver American Eagle. When offered individually, examples of the Enhanced Uncirculated 2013-W coin are selling at a slight premium to the Reverse Proof examples of the coin.

The final unaudited sales figure for the sets, offered for $139.95 each from May 9 through June 6, was 281,310. That number will drop with order cancellations, largely resulting from expired credit cards, since cards aren’t charged until the items are ready for shipping.

The first certified sets of Professional Coin Grading Service Mint State and Proof 70 coins — labeled First Strike since they were packaged and delivered by the U.S. Mint in the 30-day period following the release date — sold on July 2 for $399 on eBay.

For those submitting these coins for certification, NGC offers both its normal holder and its “Black Retro” holder. PCGS provides the option to choose from many different labels including a West Point label, a custom West Point label, an Early Release Star label, a “Don’t Tread on Me” flag label, PCGS’s normal label and one autographed by PCGS grader Miles Standish. All sell at comparable price levels right now on eBay. ¦