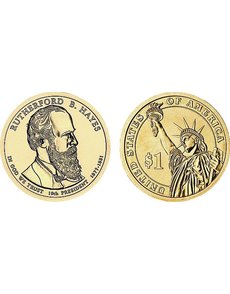 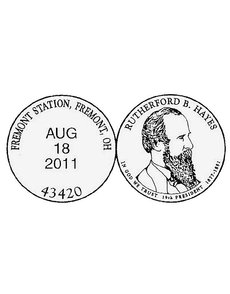 Collectors who want to obtain the official U.S. Postal Service pictorial cancellation on rolls of 2011-P Hayes dollars after the Aug. 18 ceremony can do so at the Fremont Post Office, 2120 Enterprise St.

The Spiegel Grove residence in Fremont, Ohio, of President Rutherford B. Hayes will host the Aug. 18 launch of the 2011 Presidential dollar bearing a portrait of the nation’s 19th president.

Aug. 18 is the same day the Hayes Presidential dollars will be released into general circulation through the Federal Reserve’s member banks and financial institutions and offered directly from the U.S. Mint in numismatic rolls at premiums above face value.

The ceremony is scheduled to begin at 10 a.m., with remarks to be delivered by J. Marc Landry, plant manager for the Philadelphia Mint; Thomas Culbertson, executive director of the Rutherford B. Hayes Presidential Center; and Fremont Mayor Terry Overmyer.

Following the ceremony, those in attendance will be able to exchange cash for 25-coin rolls of 2011-P Hayes dollars. Those 18 years of age and under will each receive free a 2011-P Hayes Presidential dollar.

Culbertson said after Aug. 18, coins will be available at the center’s gift shop as well as at the sponsoring bank. The bank that the Hayes presidential center is using is Croghan Colonial Bank in Fremont.

An official pictorial postal cancellation will be available for stamping on coin rolls at the Fremont Post Office, 2120 Enterprise St. The cancellation incorporates the Hayes dollar portrait in the design.

The pictorial cancellation in black ink is in addition to the standard red ink date cancellation that will also be available, as long as the item bears stamps representing the current first-class postal rate of 44 cents.

Hayes moved his family into the Spiegel Grove residence in 1873 before leaving to serve as governor of Ohio and, from 1877 to 1881, as president of the United States. After leaving the presidency, Hayes lived in Fremont until his death in 1893.

The obverse portrait of Hayes on the Hayes Presidential dollar was designed and sculptured by U.S. Mint Sculptor-Engraver Donald Everhart II. The Statue of Liberty reverse common to the Presidential dollar series introduced in 2007 is also Everhart’s work.

For more information on the event, visit the Hayes website at www.rbhayes.org. ¦