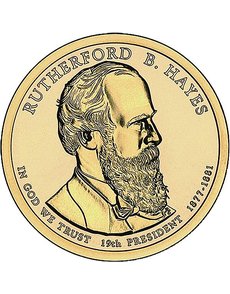 Aug. 18 is the date set for the official U.S. Mint ceremonial release of the 2011 Rutherford B. Hayes Presidential dollar coin.

Launch activities will be held beginning at 10 a.m. EDT at the Rutherford B. Hayes Presidential Center (www.rbhayes.org/) in Fremont, Ohio. Further details will be released by the Mint later.

A coin exchange is expected following the ceremony in which collectors may exchange cash for $25 rolls of the 2011-P dollars.

The Hayes property includes the mansion where Hayes and his family lived beginning in 1873.

The Hayes dollar will also be released into general circulation through the Federal Reserve and its member banks in Aug. 18. The U.S. Mint will offer rolls of the 2011-P and 2011-D Hayes dollars in specially wrapped rolls at numismatic premiums above face value at noon Aug. 18. ¦