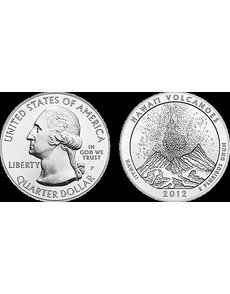 Collectors have gravitated to the Hawai‘i Volcanoes National Park 5-ounce silver bullion coin, which sold out from the U.S. Mint in just over three months.

The 2012 Hawai‘i Volcanoes National Park 5-ounce silver bullion coin has emerged as one of the few bright spots of this series that has flown relatively under the radar with collectors for the past several years.

The huge 5-ounce “hockey puck” coins were first produced in 2010 as part of the America the Beautiful silver bullion coin program. They have designs identical to the regular issue quarters, but for their size and their edge, which is lettered on the larger coins.

Of the five 5-ounce numismatic America the Beautiful coins issued in 2012, the Volcanoes and Denali coins (Alaska) have both reached their sales maximums of 25,000.

The numismatic versions for collectors are distinguished from the bullion versions aimed at investors, as the collector versions have a special finish and a “P” Mint mark.

Why did the Hawaii 5-ounce silver bullion coin sell out so quickly?

I asked one collector who said that he buys only the examples that depict parks he has visited. He purchased a Hawaii 5-ounce quarter dollar because he was attracted to the design, which plays well on the large surface area of the 5-ounce coin (it is 3 inches in diameter).

The dramatic reverse depicts an eruption on the east rift of the Kilauea Volcano. It’s one of the U.S. Mint’s most robust designs in recent memory.