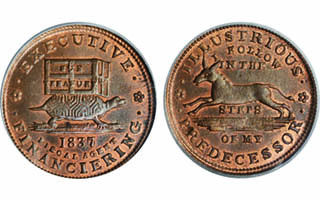 The 1837 Illustrious Predecessor token is popular in large part due to its cute turtle motif, and this gem, with substantial original red color, sold for $470 at Stack’s Bowers’ March 26 auction.

Collectors are drawn to Hard Times tokens due to the varied, often charming designs and interesting subjects covered. Most subjects fall under two categories: political subjects and merchant advertisements.

The 1837 “Illustrious Predecessor” Hard Times token is a collector favorite that will be featured, along with many others, in Q. David Bowers’ upcoming book, A Guide Book of Hard Times Tokens, which carries the subtitle, Political Tokens and Store Cards 1832-1844.

This one, graded Mint State 65 red and brown by Independent Coin Graders, was described by the firm as, “Among the finest we’ve ever seen or could ever hope to see.” It brought $470 at Stack's Bowers Galleries' March 26 Whitman Expo auction.

However, Hard Times tokens need not be expensive. A lot of eight different common types graded average Extremely Fine, but with minor problems, sold for $329, or around $41 per token.