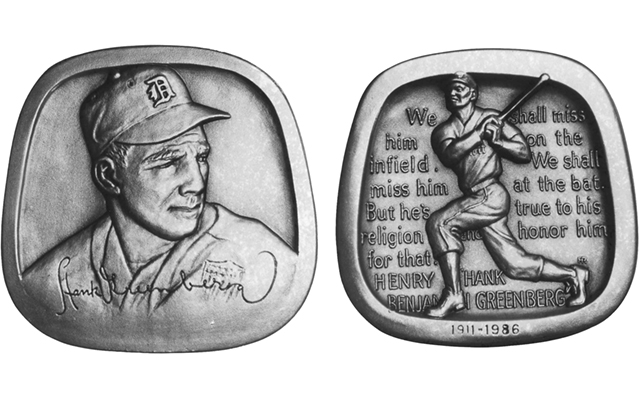 Hank Greenberg was the first Jewish player elected to the National Baseball Hall of Fame. This medal issued by the Jewish-American Hall of Fame is still available from the organization. 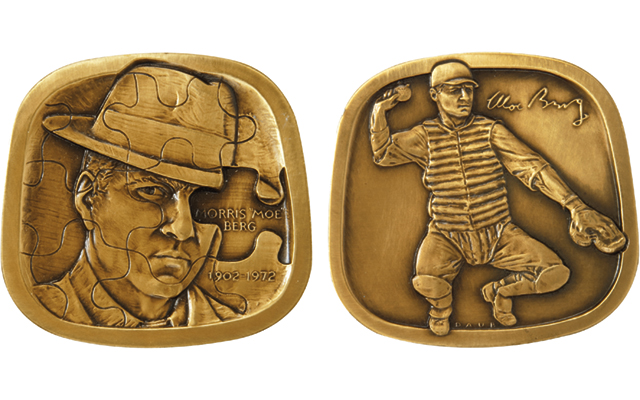 Moe Berg was not a great baseball player, but he served the United States in the intelligence community for years. He is enshrined in the CIA Hall of Fame. A medal honoring him is sold out at the JAHF, so collectors will have to search the secondary market for examples.

Greenberg was the first Jewish athlete inducted into the National Baseball Hall of Fame, as part of the class of 1956. He also was named the Most Valuable Player in 1935, again the first for a Jewish ballplayer. The 1991 JAHF medal includes a quote from a poem by Edgar Guest about a dilemma Greenberg once faced while with the Detroit Tigers — whether to play in a pair of critical games that coincided with two Jewish holidays.

The 2006 JAHF medal for Berg honors him in two categories — as a ballplayer and as a spy for the United States before and during World War II. Berg was only an average ballplayer and played for four professional teams during his baseball career. He was often called the brainiest person in baseball, and some thought he wasted his intellectual talents on the ball field. He is enshrined in the CIA’s Hall of Fame and the International Spy Museum.

Uncountable other baseball-themed medals are available to collectors, many of them silver rounds available at their bullion value. Searches through traditional auctions held by auction firms (check the sports auctions in addition to auctions of medallic works), on eBay and other Web sources, and through the stocks of dealers in medals and tokens, should yield a plentiful supply of medals.