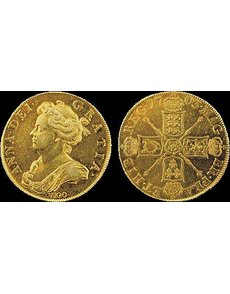 One of the rarest English gold milled coins, a 1703 VIGO gold 5-guinea coin of Queen Anne, was discovered unexpectedly in an estate. 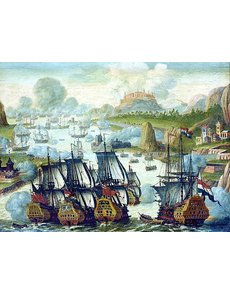 The Battle of Vigo Bay pitted the Anglo-Dutch alliance against French and Spanish ships sheltered at Vigo Bay on the Spanish coast. 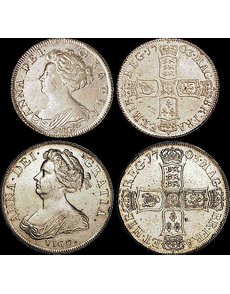 Four different silver denominations were struck in 1703, including shillings, top, and crowns, bottom, as well as halfcrowns and sixpence (the shilling was also struck dated 1702). 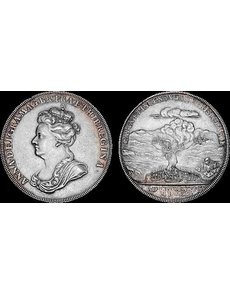 A surprise find in a handkerchief drawer included what may be just the 16th known example of one of the most famous and valuable British gold coins.

A woman searching through her late husband’s belongings found a Very Fine example of the 1703 Vigo gold 5-guinea coin, which was struck from gold seized after a victorious naval battle at Vigo Bay off the coast of Spain.

The coin, identified with VIGO beneath the bust of the queen, is regarded as one of the most desirable coins in the entire English milled gold series.

The newest example was discovered in early September when a longtime customer of English auction house Gorringes contacted the firm seeking identification of three coins. The anonymous widow (who is of retirement age) found the coins, a “very worn George IV silver crown, and an even more worn Victorian silver crown,” according to Leslie Gillham of Gorringes, along with the rare gold coin, in her late husband’s chest of drawers in what may have been his handkerchief drawer.

Gillham was shown the silver coins first. “I said ‘it’s a shame you haven’t got any gold coins’ with the price of bullion in mind,” he told Coin World on Oct. 5. “Then she took out the five guinea piece and I couldn’t believe my eyes. She didn’t know [what she had]. I told her I needed to get a second opinion, to make sure it wasn’t fake — and it isn’t,” Gillham said.

The firm consulted with London numismatic auction firm Morton & Eden for an informal opinion, and is seeking additional, official confirmation before finalizing the auction catalog. “I have no doubt that the first view will be confirmed,” Gillham said. “Their view [by the experts at Morton & Eden] was that it is absolutely genuine and that its condition is superior to that of the example sold at Spink for £82,000 in 2007 and almost as good as that of the one sold at the same auction house for £130,000 in 2005.”

Gorringes has tentatively graded the new coin as Very Fine, “subject to cataloging.”

Where has it been?

Where has a coin that is potentially worth a quarter-million dollars been?

A few days later, Gillham noted that the mystery was compounded; he just learned that the piece of furniture where the coins were found had been inherited from the widow’s parents. “So, perhaps, it has descended down the distaff side of the family,” Gillham said.

When Spink sold examples of the rarity in the 2005 and 2007 auctions, the firm reported that only 15 pieces were known in private hands.

“Presumably this figure can now be upgraded to 16 since none of the previously known examples has gone missing (to my knowledge),” Gillham said. “This is simply one of those very strange stories that still occur occasionally when something of significant value, overlooked for years, appears on the market without fanfare or warning.”

Each of the coins has the usual obverse and reverse types appropriate to their denomination but on the obverse of each denomination something additional is added. Below Queen Anne’s bust the word VIGO was engraved into the die. The dies were the work of the Mint’s chief engraver, Henry Harris and his assistant John Croker.

The story of the VIGO coins is a romantic one involving naval battles, captured bullion and generally small coin mintages.

When the war of Spanish Succession broke out in 1702, an Anglo-Dutch coalition immediately began naval operations against Spain, the weaker partner in the French-Spanish alliance, according to H. Kamen in the June 1968 edition of The Numismatic Circular, published by Spink & Son of London.

The Anglo-Dutch effort to control the vital port of Cádiz failed, but the coalition learned that the annual parade of Spanish galleons bringing silver and gold mined in the New World was expected to arrive soon at Cádiz. The Spanish ships were accompanied by a small number of French military and merchant ships.
Leaders of the Spanish procession, having learned of the attempt to seize Cádiz, decided finally to disembark at Vigo, arriving on Sept. 23. The port at Vigo was ill-equipped to off-load the treasure, lacking the proper personnel and facilities, and this delay allowed the Anglo-Dutch contingent (under command of Adm. Sir George Rooke, who had just failed spectacularly to control Cádiz) to divert forces to Vigo Bay, anchoring off the coast on Oct. 22.

The next day, the coalition attacked and quickly overwhelmed the contingent of treasure ships in the harbor (the date of the battle is sometimes reported as Oct. 12, the date under the Gregorian calendar then in use).

“The Allies with their full-scale armada completely outnumbered and outgunned the few French warships, and the Spanish merchantmen were of course largely defenseless,” wrote H. Kamen in the June 1968 edition of The Numismatic Circular. “When the plate fleet left Hispaniola it had not expected to encounter a state of war in Europe, and it now paid the price for this unpreparedness.”

The victors reaped the spoils, which included silver and gold bullion. According to C.E. Challis, writing in A New History of the Royal Mint, the haul “was modest, consisting in good part of ornaments and plate from the cabins of the officers and amounting to no more than 4,500 lb of silver and just 7 lb 8 oz of gold.”

The silver contained some 11 million pieces of eight (8-real coins), according to Peter Seaby, in The Story of British Coinage.

The treasure was far less than that what had been on board the ships originally, though, as much of the Spanish king’s silver had already been off-loaded.

The destruction of the enemy fleet inflicted a serious blow to French naval power, and the significance of the action, obvious at the time, was celebrated with the production of coins.

“Production” is the appropriate word, as the familiar English pageantry was on full display as the bullion was transferred to the Royal Mint, then in the Tower of London. There, mintmaster Sir Isaac Newton oversaw the delivery, a rarity given his frequent absences. A royal warrant calling for the coins mandated the addition of VIGO below the bust of the queen to “Continue to Posterity the Remembrance of that Glorious Action.”

The gold coins struck are all very scarce to very rare and would be beyond the means of most collectors.

The silver coins, however, were struck in generally large numbers.

According to Spink’s 2007 auction catalog, only five examples of the 5-guinea coin appeared at auction within the preceding 45 years, making the appearance of one of the coins at auction almost as rare as the coins themselves.

At least eight public auction offerings of the VIGO 5-guinea coins have been conducted since 1974, with some of those sales offering the same coins sold at earlier auctions.

While the costs of purchasing the gold coins and a complete set of the four silver denominations (crown, halfcrown, shilling and sixpence), plus the 1702-dated shilling, are prohibitive to most collectors, the silver set should be obtainable in EF condition for less than the cost of a VIGO guinea in Fine condition (a silver set might cost in the neighborhood of $12,000, more or less).

Another numismatic collectible is the 1703 medal designed by John Croker to mark the event. Queen Anne is featured on the obverse, while the reverse shows the victorious result of battle.
Both silver and copper medals were struck.

The Croker medal is one of 10 different medals from various contemporary sources commemorating the event cataloged by C. Wyllys Betts in American Colonial History Illustrated by Contemporary Medals. The legendary John J. Ford Jr. Collection featured a stunning array of the Vigo Bay medals and, customary to Ford’s collection, often included multiples of the same piece.

The whole series of Vigo Betts medals is another area to explore along with the Vigo Bay coins. ¦