Half Dome Collection of Indian Head eagles in Legend auction 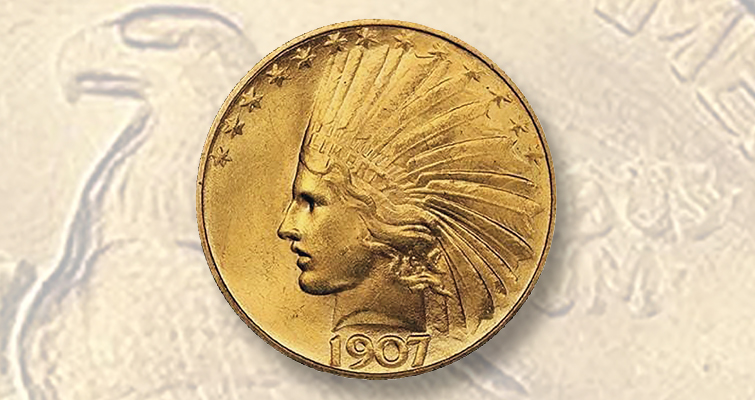 A 1907 Indian Head gold $10 eagle of the transitional Rolled Edge variety was struck for circulation but has long been listed among patterns. This MS-65+ example is among the finest survivors and has a top estimate of $550,000 at Legend’s Regency 50 Auction. 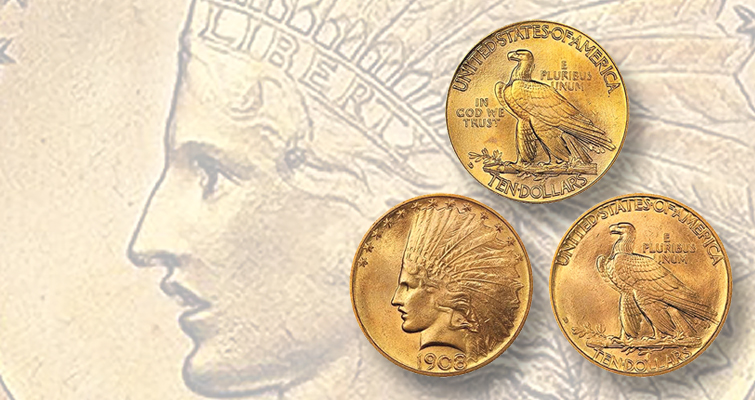 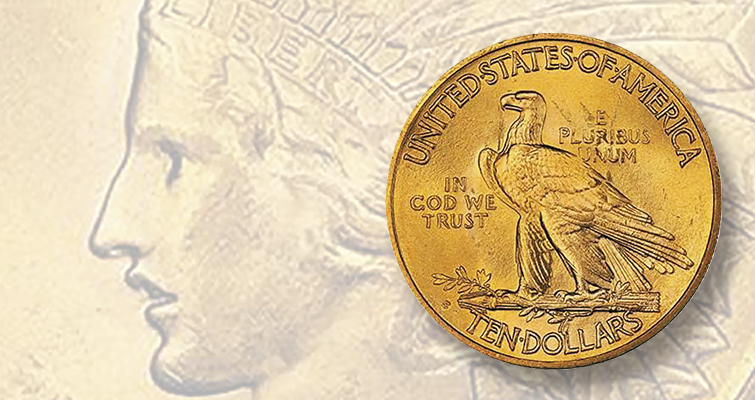 This MS-65 1930-S Indian Head gold eagle with a green CAC sticker is among the finest rare survivors of this late San Francisco Mint issue and is part of Legend’s Jan. 27 sale in Las Vegas.

Some stellar Indian Head gold $10 eagles from the Half Dome Collection are set to impress at Legend Rare Coin Auctions Regency 50 Auction in Las Vegas on Jan. 27.

While traditionally listed in the Judd pattern book, this version of the first year of the new design was intended for circulation, and 31,500 were struck from an order dated Sept. 9, 1907.

David Akers wrote in 1988, “The surviving examples are mostly high quality and were either saved as assay pieces or obtained directly from the Mint prior to the decision to melt the issue.”

It seems all but 50 were melted, and PCGS estimates that around 40 exist in all grades today.

The issue appears to be a transitional one as the Philadelphia Mint worked to adapt Augustus Saint-Gaudens’ design to the rigors of coin production.

Heritage offered another example graded MS-65 by PCGS at its 2021 Florida United Numismatists auction — where it realized $264,000 — and wrote on the Rolled Edge issue, “It retains the smooth, sculpted details of Augustus Saint-Gaudens’ original Wire Rim models but with a defined border that Chief Engraver Charles Barber turned into the die in an effort to improve stacking of the coins.”

Legend praised the eye appeal of the Half Dome example and noted that Legend Numismatics purchased the coin from auction for $376,000 in June 2016, explaining, “Just prior to cataloging this coin, the owner turned down $500,000 from TWO people!”

With and without a motto

Two distinct subtypes of Indian Head gold $10 eagles were struck in 1908: one without the motto IN GOD WE TRUST (called “No Motto”) and those with the motto that was added later in the year. The Half Dome Collection offers a 1908-D Indian Head, No Motto eagle graded MS-64+ by PCGS and bearing a green CAC sticker. In describing the coin, Legend introduces a term new to this writer when it states, “Super satiny and smooth surfaces reveal NO major ticks, giggles, or frost breaks.” Giggles aside, the eye appeal of this Denver Mint No Motto issue is unusually handsome. It has an estimate of $17,500 to $20,000.

Even more exceptional is a 1908-D Indian Head, With Motto $10 eagle that has unusually clean and satiny surfaces for the issue, with booming luster and “ORIGINAL blazing gold/yellow colors.” PCGS has graded only a dozen finer examples, leading Legend to call the issue an “unquestionable ‘silent’ stopper for the series.”

Legend concluded the description for the PCGS MS-65 gem with a green CAC sticker by writing, “This date was the last one Half Dome needed to complete his set. That says it all as to how rare this date and grade is. Opportunity knocks loud here!”

This rare 1930-S Indian Head eagle graded PCGS MS-65+ with a green CAC sticker has a top estimate of $165,000 and is among the finest survivors of this low-mintage date. Only 96,000 were struck at the San Francisco Mint in 1930. Most were melted, with a small number of coins made available though the Mint cashier or by distribution through the Federal Reserve Banks, with some research suggesting that remainders from the annual assay may have been available to collectors through the Philadelphia Mint.

PCGS estimates that around 250 survive, mostly in Mint State grades. Legend calls the surfaces, “pretty clean overall,” advising, “This coin is nowhere near as typically whacked up as these typically come.”

To bolster that faint praise for the often heavily marked issue, the description goes on to say, “A strong luster radiates from all over. Both sides are GEM original orange gold color. Miss Liberty and all of the details are sharply struck and stand out. The eye appeal is wonderful!” 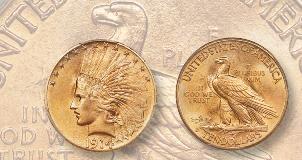 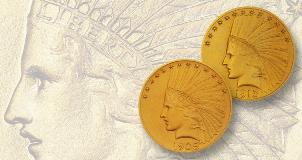 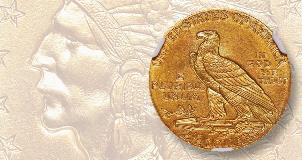