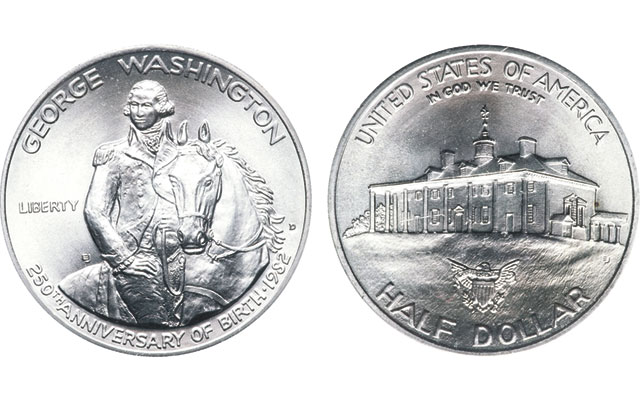 Coordinating coverage of production of the George Washington 250th Anniversary silver half dollars provided a challenge for Coin World in 1982.

Providing timely coverage of ceremonial first strikes of the first modern commemorative coin — the half dollar honoring the 250th anniversary of George Washington’s birth — presented a nightmarish challenge for a weekly publication such as Coin World in the summer of 1982.

However, Editor Margo Russell with her “can do” attitude was determined to provide eyewitness coverage (complete with photographs) despite the realities:

The ceremonial striking events were to be held on the same day (Thursday, July 1) at the Denver Mint and San Francisco Assay Office — thousands of miles away from and in different time zones than Coin World’s Sidney, Ohio, production facility.

Coin World’s weekly edition went to press (without fail) at 1 p.m. on Friday of each week.

The stories had to be written and entered into the Amos Press production system and the film had to be processed, printed, and prepared for the presses in Sidney — all within the span of less than 29 hours after the start of the first striking event in Denver.

This was before the Coin World editorial department had a FAX machine and over a decade before email or electronic transmission of images for print media.

Margo was sure we could meet the Friday deadline — IF all of our flights were on time. She assigned me to cover the Denver Mint striking of the Uncirculated half dollar, and Coin World columnist and commemorative coin expert Anthony Swiatek to cover the San Francisco striking of the Proof coin.

Anthony had been invited by Mint Director Donna Pope to strike a coin at the ceremonies in Denver and San Francisco because of his expertise in commemorative coins and his testimony at the congressional hearing that played a key role in passage of the authorizing legislation. He flew from New York to Denver on Wednesday afternoon. I took a Wednesday night flight from Dayton, Ohio. Margo had booked rooms for both of us at Denver’s famed Brown Place Hotel, a short walk from the Denver Mint.

Thursday morning Anthony and I met and departed for the Mint. We arrived about an hour ahead of the other guests. We wanted to check the location of the ceremony because we were concerned about lighting. Since no striking events had been held in decades, there was no playbook and we were unsure of what to expect.

Beth may be contacted at beth@cashinyourcoins-book.com.