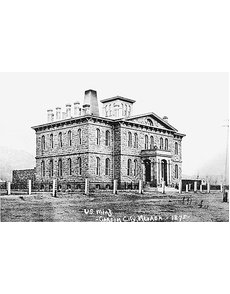 I have an important question, regarding an 1854 half dime. I attended an estate auction. Upon entering and checking some other coins, the auctioneer told me he had an 1854-CC half dime. Not thinking anything of it, I checked it with my loupe; it was worn on the face and back, but the date and CC Mint mark were very plain.

I contacted the auctioneer to track down the buyer, because I want another look at this coin.

I know what I saw, but can you enlighten me on this?

Before further discussion, a genuine 1854-CC Seated Liberty half dime is an utter impossibility.

First, Carson City, Nev., home to the Branch Mint whose coins bear the CC Mint mark, did not exist in 1854. The community itself was not founded until 1858; in 1854, a small outpost was the only gathering at the future site of the city.

The region was still sparsely inhabited by Americans in 1854, although that would change as reports of gold finds spread during the decade, and the existence of the Comstock Lode of silver-bearing ore became public in 1859. The Nevada Territory would be established March 2, 1861, after the population had grown sufficiently large enough to persuade Congress to authorize territorial status.

Given these factors, it is easy to see that an 1854-CC half dime or any Carson City Mint coin of that date is an impossibility. However, counterfeits of impossible design, date, Mint mark and denomination combinations have been produced in China and have entered the U.S. marketplace. Some have even been artificially circulated to exhibit wear.

If reader Welsh gets to examine the coin again, he should carefully compare its designs to genuine 1854 half dimes. The half dime designs of 1853 to 1859 are quite different from the half dime designs of 1860 to 1873, in the style of the Seated Liberty figure, the style of wreath and the placement of legends. If the date and Mint mark combination are as he remembers, he may find that the coin has additional, design-related inaccuracies.