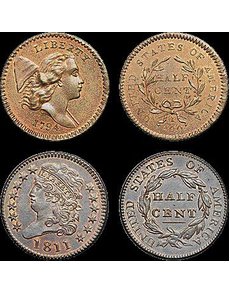 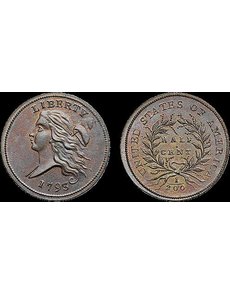 The finest known example of any United States half cent shattered a nearly 18-year-old auction record for half cents Jan. 26, while also becoming the first half cent to sell at auction for more than $1 million.

The coin was the top lot of 230 from the Missouri Cabinet of U.S. Half Cents assembled by R. Tettenhorst, the pseudonym for the St. Louis collector who assembled the collection over a period of more than four decades.

Before its inclusion in the Missouri Cabinet, the coin had been acquired in 1977 by California dealer Fred Weinberg for less than $1,200, at an obscure coin show in a remote Swiss village outside Zurich.

The Missouri Cabinet auction was conducted at The Luxe Sunset Boulevard Hotel in Los Angeles by Ira & Larry Goldberg Auctioneers with Bob Grellman & Chris McCawley, The Copper Specialists. The sale brought total prices realized of $18,271,631. All 230 lots were reported sold.

Prices realized include the 15 percent buyer’s fee added to the closing hammer price of each lot won.

“It was the wildest sale I can recall ever happening,” Ira Goldberg said. “It was probably the finest speciality collection of U.S. coins in a single sale. It took me six hours to call 230 lots.”

While the sale attracted intense bidding from Internet bidders, Goldberg said 90 percent of the lots were purchased by floor bidders, attending the sale in person.

Laura Sperber from Legend Numismatics, said, “I have never, in 40 years of doing this, seen such a display of well-heeled collectors at a sale.”

“These guys came to buy coins,” Sperber said. “Price was a consideration, but not the ultimate concern. They wanted to go home with coins.”

Although still able to be able to place successful bids totaling $2.2 million, Sperber said she found herself the underbidder on many coins in which she and her clients were interested. Sperber estimates that 90 percent of the lots were purchased by collectors.

She said she did manage to acquire, for a Far East collector to complete his collection of 1793 U.S. copper coins, the 1793 Liberty Cap half cent, Cohen 4, PCGS MS-66 brown, stickered by CAC.

The Missouri Cabinet collection was assembled in a collaboration between Tettenhorst and the Eric P. Newman Numismatic Education Society.

Forty-two of the 96 half cents in the Missouri Cabinet were once held by numismatist and author Howard Rounds Newcomb. They were sold by Texas numismatist B. Max Mehl late in 1935 to collector Col. E.H.R. Green. Green died in 1936. The Green Collection was purchased from the estate in April 1943 by Newman and St. Louis dealer Burdette G. Johnson.

The finest known 1794 Liberty Cap half cent, Cohen 7, the coin that brought the $1 million hammer price in the Jan. 26, 2014, sale, was found and purchased by Weinberg in 1977 during one of his many buying trips across Europe for Numismatics Ltd. of Beverly Hills, Calif.

On a venture to Zürich, Weinberg, traveling with dealer Harry Gordon, eventually visited a small coin show in a remote village several hours from Zürich.

The primary purpose for this visit was the same as in their previous European ventures — acquiring and repatriating thousands of United States gold coins, primarily $20 double eagles, that had been sent overseas over the years in the process of settling U.S. debts with foreign nations. Weinberg said he repeated a single phrase in Swiss German at each table, indicating that he was seeking U.S. gold coins.

Seated at one table was an older couple who had some European copper and silver coins in open display trays. Although they did not have any U.S. gold coins to offer, the man hesitated at Weinberg’s repetition of the Swiss German phrase about seeking U.S. gold coins, then produced an unexpected offer — a silver 1916 Standing Liberty quarter dollar and a 1794 Liberty Cap half cent.

The half cent had been passed down through the man’s family.

The quality and strike of the 1794 half cent caught Weinberg’s eye. Weinberg said he was quoted, in Swiss francs, the equivalent of $1,200 in U.S. dollars to buy the two coins, and he made the purchase.

When he began to research the 1794 half cent after his return to America, he learned it was the so-called “High Relief Head” variety.

Weinberg said his initial estimate for the value of the 1794 half cent was about $5,000, which quickly escalated when he determined its rarity. The coin was advertised a number of times in Coin World in 1977 and 1978 with an asking price of $35,000.

Maryland numismatist Julian Leidman subsequently purchased the coin in 1978 for Tettenhorst, for incorporation into the Missouri Cabinet.

The top two lots were won by the same dealer for placement with the same southwestern United States collector, according to Ira Goldberg.

Additional top lots in the Missouri Cabinet sale and their prices realized include: