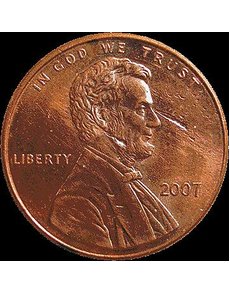 A broad patch of struck-through errors appears on both sides of Lincoln’s head in this 2007 cent. 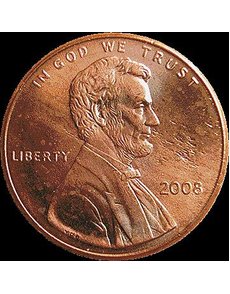 A clear northwest-southeast directional characterizes the field-restricted, struck-through errors on this 2008 Lincoln cent. 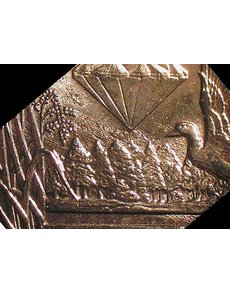 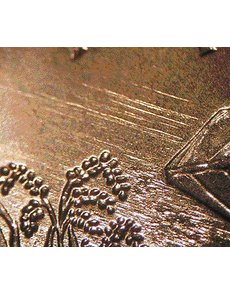 Fine die scratches merge with the debris patch on the Arkansas quarter dollar, in this close-up image. 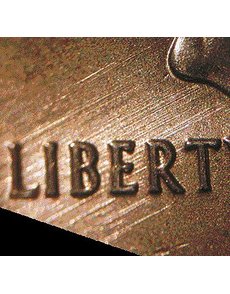 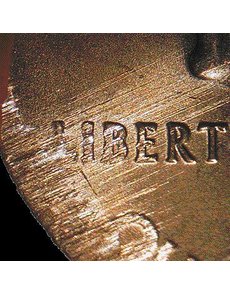 A second 2003-P Arkansas quarter dollar was badly scraped immediately after the strike. The striations are perfectly aligned with the die scratches.

It is therefore no surprise that impressions left by foreign matter seldom respect the boundaries of the design. This is especially true of discrete flakes and fragments. Their positioning in the striking chamber is random so it’s highly unlikely that the edge of a fragment will precisely coincide with the edge of a design recess in the die face.

When it comes to die fill (“grease”) the constraints are a bit different. Die fill forms a relatively amorphous mass that tends to be slowly-accumulating and slowly-diminishing. These properties can lead to die fill pooling in design recesses without slopping over onto the field portion of the die. The term “filled die error” is often applied to the pinpoint loss of design elements caused by this mechanism.

The expectation of unpredictable positioning for compact struck-through errors is confounded by cases in which the impressions are confined to the field and end right at the edge of the design.

Our first example of such a conundrum is a 2007 Lincoln cent with numerous small struck-through errors, most of which appear to the right of Lincoln’s head. One pit is located to the left of his head and an interior pit is found along the jaw line. The pits are well-organized, with a clear northwest-to-southeast orientation.

Many of the pits are elongated in the same direction. The pits are sprinkled within a larger zone that is less reflective than the normal, die-struck field. It would appear that a smoothly textured, thinly applied substance spanned the gaps between the more discrete elements studding the die face.

I have seen a number of other recent cents with the same pattern of struck-through errors. The same debris patch can appear on multiple coins struck by the same die pair, indicating that the debris was firmly attached to the die face.

In all such errors it would appear that a gritty paste was smeared onto the die face by a moving machine part, most likely the feeder/ejection mechanism. An apt analogy would be a butter knife with a little bit of chunky peanut butter clinging to its blade. If you drag the knife over a slice of bread with large gas pockets, the peanut butter will only stick to the outer surface of the bread. The holes in the bread, like the recesses of the die, will not be filled by the peanut butter.

Both the 2007 and 2008 cents were struck by inverted dies (obverse die as anvil die). The anvil die is more likely to be smeared with paste since the feeder/ejector slides across the anvil die face during both actions.

Further evidence for the gritty paste conjecture can be found in a large series of broadstruck 2003-P Arkansas quarter dollars provided by error dealer Fred Weinberg. These coins were also struck by inverted dies, but it is the hammer (reverse) die that is more strongly affected and the directionality of the debris patch is reversed.

Our first example from this sample shows a broad debris patch on the reverse face that extends in a northwest-southeast direction. Numerous elongated (and often contiguous) pits appear in the field, around and between the raised design elements. Aligned with the irregular pits are an abundance of fine, parallel die scratches. Evidently, the feeder/ejector scratched the reverse die face. The obverse die also shows fine, parallel die scratches arranged in the same direction (southwest-northeast) as those on the reverse face. The encrusted feeder/ejector must have damaged both dies but only deposited the gritty paste on the hammer die.

A second example from this group shows feeder/ejector damage to the coin after the strike. Severe scrapes in the southwest quadrant of the obverse face are perfectly aligned with the die scratches.