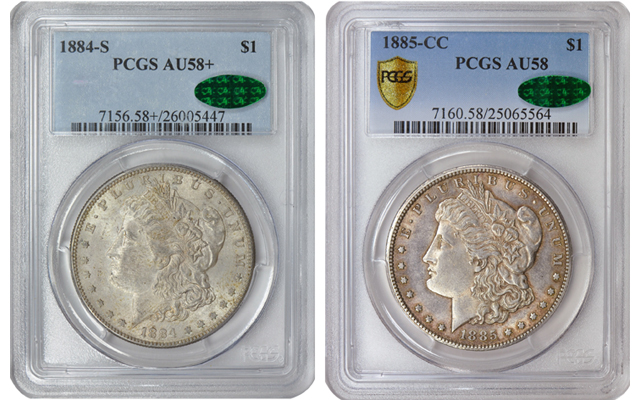 All coins are being sold unreserved, with bidding to start at $1.

PCGS launched the Everyman sets several years ago in response to demand from collectors who have amassed superb About Uncirculated sets in many categories, but they did not rank as the finest when including Mint State examples.

Ian Russell, president/founder of GreatCollections, said Capuano started to collect high-end AU Morgan dollars in 2008, when he realized that Mint State examples of many key dates would cost a fortune. Caspuano's goal was to find the very best AU example that he could find and each coin had to have CAC approval.

"It's interesting to note how difficult it is to obtain AU examples of some issues," Russell said. "For example, some of the Carson City issues are extremely rare in circulated condition. Another difficult-to-find coin is the 1884-S, a condition rarity. The Capuano 1884-S has been graded PCGS AU-58+, CAC.”

Also on Dec. 21, GreatCollections will be offering a complete set of Proof American Eagle silver dollars, all graded PCGS Proof 70 Deep Cameo, including the 1995-W American Eagle from the 10th Anniversary set. The coins are being auctioned individually and are also being sold unreserved, with bidding to start at $1.

To register to bid, view highlights or find out more information about the Capuano Collection of Morgan Dollars, please visit GreatCollections online or telephone the firm at 800-442-6467.