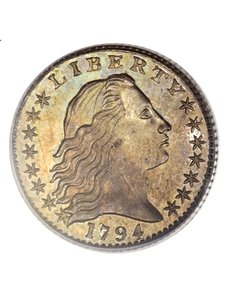 Heritage Auctions is proud to present the official auctions of the 2012 National Money Show in Dallas! For this October 18-21 event in their hometown, they have brought together more than 7,600 lots from more than 200 consignors, with another 4,500 lots up for bid in the October 18-22 Currency Auction.

Some of the outstanding Featured Collections in the US coin auction are:

The Greensboro Collection, Part I focuses on proof Seated dimes and proof Barber quarters, and includes such rarities as the "Little Orphan Annie," the 1844 dime, in PR66 NGC. Also included are several proof and specimen strikings from other series, including an SP66 Brown NGC example of the 1793 Wreath cent with Vine and Bars edge, an SP67 NGC 1794 half dime, and an 1802 novodel proof dollar graded PR64 by PCGS.

The consignor behind The Cornerstone Collection began in the 1960s and built a fine cabinet over the decades. Selections include a broadstruck 1924-S Mercury dime, MS64 Full Bands PCGS, and a 1907 High Relief double eagle with Wire Rim, MS64 PCGS.

The Gnome at the Shore Collection is a name that brings up whimsical images, but one look at the collection tells how serious the consignor is about coins. An 1870-CC double eagle, XF40 NGC, leads a remarkable sequence of Liberty double eagles. Highlights from other denominations include a 1911-D quarter eagle, MS65 NGC; an 1883 three dollar gold, MS64 Prooflike NGC; and an1879 Flowing Hair Stella in gold, PR55 PCGS.

While the main focus of The John Henderson Collection was on currency, as evidenced by the excellent offerings in the currency Signature auction, his U.S. coins include highlights such as an 1851 Reeded Edge Humbert fifty dollar octagonal "slug," AU53 NGC, and a Snow-9 1856 Flying Eagle cent, PR64 PCGS.

This is just a taste of the outstanding offerings in the Heritage Dallas auction, open for bidding very soon at HA.com/Coins.