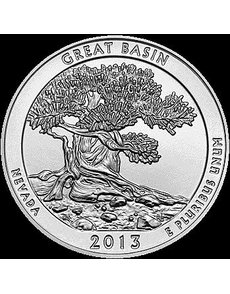 Dates for the launch of the 2013 Great Basin National Park quarter dollar in Nevada and preceding coin forum were announced May 2 by the U.S. Mint.

The official coin launch ceremony, after which cash can be exchanged for $10 face value rolls of the new coins, is set for 10 a.m. Pacific Daylight Time June 20 at the same location.

U.S. Mint officials have not yet announced who will represent the bureau at both events, nor the identities of any Nevada dignitaries who might attend. Also not announced is the sponsoring bank for the coin exchange, nor if the coins to be exchanged will be strikes from the Philadelphia Mint or strikes from the Denver Mint.

The 2013 Great Basin National Park quarter dollar is scheduled to be released into circulation through the Federal Reserve beginning June 10.

The quarter dollar’s reverse was designed by Ronald D. Sanders, a master designer with the U.S. Mint’s Artistic Infusion Program, and sculptured by U.S. Mint Medallic Sculptor Renata Gordon. As described by the U.S. Mint, the design depicts the beauty and unique qualities of a single bristlecone pine tree and the rocky glacial moraines where the trees grow.

The quarter dollar commemorating the park in Nevada will be the 18th coin to be released under the America the Beautiful Quarters Program. ¦