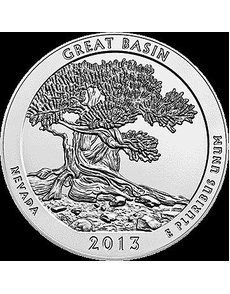 The .999 fine silver, 3-inch coin is the third Uncirculated 2013 5-ounce silver coin to be released under the America the Beautiful Silver Bullion Coin Program.

The Uncirculated coin, bearing the P Mint mark of the Philadelphia Mint, is the collector version sold by the Mint directly to customers at a fixed price.

The bullion coins, although also struck at the Philadelphia Mint, do not have a Mint mark.

The design for the Great Basin National Park coins for Nevada depicts the beauty and unique qualities of a single bristlecone pine tree and the rocky glacial moraines where the trees grow.

The Uncirculated numismatic version of the 5-ounce silver coin, unlike the bullion version, receives a post-strike treatment resulting in a finish similar to what the U.S. Mint produces for 3-inch bronze medals.

To protect the Uncirculated quality finish, each coin is enclosed in a plastic capsule and placed in a presentation case. A certificate of authenticity is included.

As with all products sold by the United States Mint containing precious metals, the price is subject to change. Orders will be accepted at the bureau’s online catalog at www.usmint.gov/catalog and at 800-872-6468. Hearing- and speech-impaired customers with TTY equipment may order by calling 888-321-6468.

When the U.S. Mint first began offering 5-ounce silver Uncirculated coins on April 28, 2011, with the 2010-P Hot Springs National Park coins, the coins were offered at $279.95 each. The drop of the spot price of silver since then as resulted in the Mint adjusting prices downward several times. ¦