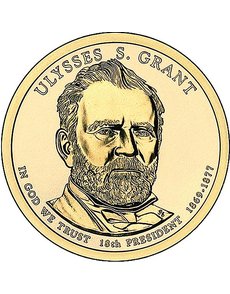 The 2011 Ulysses S. Grant Presidential dollar goes into circulation May 19, the same day an official coin launch ceremony and roll exchange will be held at the Ulysses S. Grant National Historic Site in St. Louis.

May 19 marks the anniversary of Gen. Ulysses S. Grant's campaign in 1863 to take the Confederate stronghold at Vicksburg, Miss.

Nearly a century and a half later, the United States Mint will release to the Federal Reserve Banks a new dollar coin struck in honor of Grant, who went on to become the nation’s 18th president.

To observe the coin’s release, the Mint, in conjunction with the National Park Service, will hold a launch ceremony and coin exchange on May 19 at the Ulysses S. Grant National Historic Site in St. Louis.

The Grant dollars will be shipped to banks and other financial institutions in 25-coin rolls, unmixed with other dollar coins. For each new design, banks may order and store the coins up to three weeks prior to the introduction, so they will have supplies on hand on the release date. The coins will be available in unmixed rolls for two weeks after the introduction of each design. The special ordering process begins again when each new Presidential dollar is released.