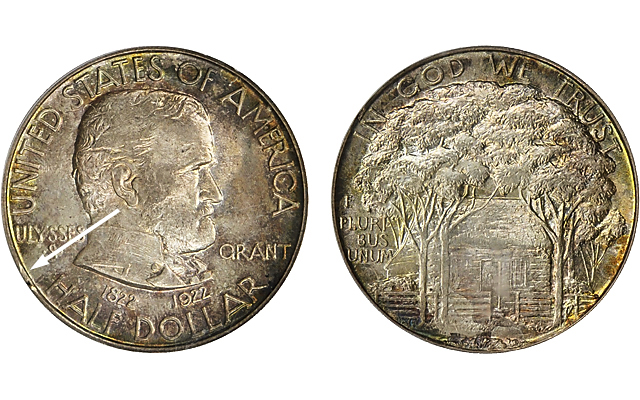 Minor Mint errors on otherwise gorgeous, pricey coins like this 1922 Grant Memorial, No Star commemorative half dollar have the potential to limit the buying audience. This one graded MS-67 with a minor planchet flaw (indicated by an arrow, left) noted on the PCGS slab went unsold.

Sometimes, they are categorized as Mint errors such as in the case of a 1922 Grant Memorial, No Star half dollar, in a PCGS Mint State 67 holder labeled “Mint Error” with the error described as a “Minor Plan Flaw @ 8:00.”

Other times minor Mint errors (often laminations, which are the result of metal separation on the surface of the planchet) are incorporated in the market grade of the coin. In market grading, the numerical grade is reduced according to the visual severity of the error.

The problem with an error on an otherwise exceptional coin is that it can sometimes scare off buyers. Commemorative coin buyers are often hesitant to buy a coin that has a qualifying label like “Mint Error” and most error coin collectors would be content to have a minor planchet flaw be represented by an inexpensive coin.

As a result an expensive coin like this can be a tough sell. It went unsold with a starting bid of $2,750. For reference, comparably graded nonerror representatives of the issue sell at the $3,000 to $4,000 level typically.