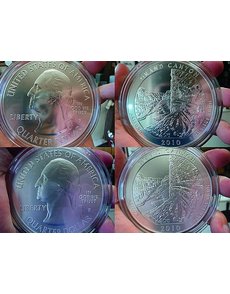 An uncertain number of Uncirculated 2010-P Grand Canyon National Park 5-ounce silver coins missing the post-strike finish were shipped by the U.S. Mint to customers who ordered the numismatic coins.

U.S. Mint officials were unaware that Mint had released coins missing the post-strike finish when contacted July 13 by Coin World.

Minnesota collector Aaron J. Gelner reported to Coin World on July 12 that his local barber, Tom Schneider, had received two of the Uncirculated 2010-P Grand Canyon National Park 5-ounce silver coins that day, one with the post-strike finish and one without. Images of the two coins taken by Gelner are illustrated with this article.

The same ready-to-strike 5-ounce planchets received from supplier Sunshine Minting from Coeur d’Alene, Idaho, for the bullion versions are also used for the Uncirculated numismatic versions. However, the numismatic coins undergo a “vapor blasting” technique after striking, resulting in a finish replicating that used on 3-inch bronze Mint medals, according to U.S. Mint spokesman Michael White.