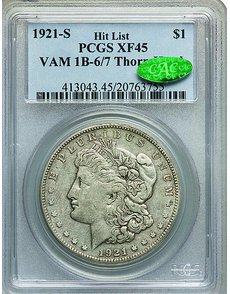 A PCGS label for a 1921-S Morgan dollar, Thorn Head VAM 1B-6/7 variety, is partially obscured by a CAC sticker.

We’ve heard the phrase “Buy the coin, not the holder.” Some hobbyists, however, collect third-party grading service holders and other holders rather than coins.

In 2010, a 1924 Saint-Gaudens gold $20 double eagle, graded Mint State 62 by Numismatic Guaranty Corp. and housed in a “black” slab, sold for $3,805 in an eBay auction. At the time, similarly graded double eagles were selling for half that amount. The black slab was the first slab used by NGC, and only for a few months.

Today, though, I’m writing about the graphic design of holders. As I collect coins graded by Professional Coin Grading Service and NGC, I’ll critique those slabs.

Among these services’ older slabs, for instance, are the PCGS “Old Green Holders,” known by their initials — “OGH”; and older NGC holders known by what they resemble, such as a “Soap Dish.”

Those slabs — especially early “Rattler” PCGS ones — are poor examples of graphic design. Labels on “Rattlers” are in typewriter font, and the coins inside often jostle to become upside down. (As for NGC’s Soap Dish, slabs should not look like bathroom accessories.)

Current PCGS and NGC holders are modern looking and attractive. I have a few quibbles, however.

Because PCGS lists two sets of numbers on its label — one for the coin, one for certification — there is less room for the various forms of First Strike, VAM Hot List and coin nickname nomenclatures.

The label information is also easily obscured by a Certified Acceptance Corp. sticker. Type the terms “PCGS, VAM, CAC” into an online search engine and see the images for examples of the problem. These considerations play a role in where I send coins for slabbing.

I also try to match the coin’s type, metal, luster and patina with the graphic design of the holder.

The PCGS label also highlights the beauty of gold, light gray or Mint State and Proof silver coins as well as most copper-nickel, copper-nickel clad and red copper coins.

In particular, the blue label spectacularly showcases pastel patina on American Eagle silver dollars and Morgan dollars, but may be too dark for some brown copper coins, circulated silver coins and coins with dark red, blue and purple patina.

Coins with rainbow patina look lovely in NGC holders because the white background highlights the colors. NGC’s holders also complement the metallic beauty of gold and most copper-nickel, copper-nickel clad, circulated silver and all copper coins. However, bright white silver coins may wash out against white labels.