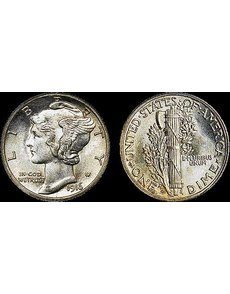 This 1916-D Winged Liberty Head dime is not the one mentioned in the article, but is used to illustrate a point. An individual coin can be submitted to a grading firm many times, with each submission listed in the population reports.

I keep a little clipping file of things that amuse me. A recent Wall Street Journal article referred to a startup company, Planetary Resources Inc., stating that the amount of gold yet unmined would last only 18.9 years. Personally, I thought it was 23.62 years!

There is enough oil in the earth to last 46.2 years, the article continued, and enough natural gas for 58.6 years, enough copper for 136 years, and other estimates.

If you want to turn a guess into a fact, add a number to it. Or so it seems.

If I stated that 2,742 numismatists were interested in Connecticut copper coins dated 1785 to 1788, Coin World readers would think that this was information they could take to the bank, the result of a careful study.

No one would question me at all, feeling I had done in-depth research. If had said “several thousand people collect Connecticut coppers,” the statement would go unheeded.

One of the most curious “facts” in numismatics is that population reports of certified coins are an accurate estimate of how many exist. In my opinion, the larger amount of scarce and rare coins, including in high grades, have never been sent to the certification services.

Take Carson City Mint silver dollars for example. For some issues in the 1880s, hundreds of thousands of Mint State coins were sold by the General Services Administration to buyers who paid a sharp premium for them.

Only a tiny fraction has ever been certified.

Moreover, for certain series — 19th century gold coins being a poster example — many coins that were graded About Uncirculated years ago are now certified Mint State.

If you read the excellent series of books on gold coins produced by the late David Akers from 1975 to 1982 and compare population report figures to, for example, the number of Mint State Charlotte and Dahlonega Mint coins he estimated, you will scratch your head. Mint State coins have multiplied in all directions.

As if that were not enough, population reports refer to submission events, not different coins. As I have mentioned before in my column, a dealer acquaintance sent the same 1916-D Winged Liberty Head dime in for certification 24 times until on the 25th it was certified as MS-65. This was a win-win situation for the dealer, as the value jumped by thousands of dollars — more than offsetting the fees. The grading service hit a home run as well by charging 25 times to review the same coin.