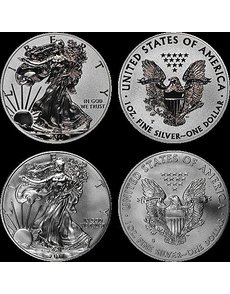 Exclusive to the 2011 25th Anniversary American Eagle Silver Coin Set is the 2011-P Reverse Proof coin, top, struck at the Philadelphia Mint, and below, the 2011-S Uncirculated version with burnished finish struck at the San Francisco Mint. The examples shown came from a set submitted Nov. 8 to NGC for grading and encapsulation. 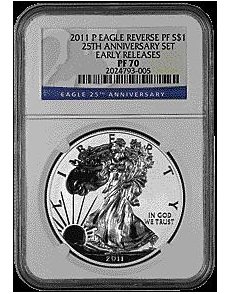 The logo for the label NGC is using to encapsulate each of the five coins in the 25th Anniversary set depicts the number 25 (for the anniversary), with an eagle soaring out through the numbers. 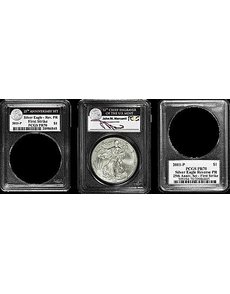 PCGS holders show how the grading service’s labels will appear for two different options — the regular option at left, and the center bearing the autograph of John Mercanti, the retired chief engraver at the U.S. Mint, who in 1986 designed the reverse of the silver Eagle. A representative example for one of the labels that will appear on the side showing the coin’s reverse is in the holder at right.

The following article is an extended version of the article appearing on Page 1 of the print and digital editions of the Nov. 28 issue of Coin World.

Professional Coin Grading Service, Numismatic Guaranty Corp. and ANACS are going to grade and encapsulate with their own unique grading labels the coins from the 2011 25th Anniversary American Eagle Silver Coin sets.

PCGS and NGC already have their labels prepared and received the first of their submission of sets Nov. 9 for grading and encapsulation. As of Nov. 8, ANACS had not finalized its label designs.

Collectors should be aware that the grading services are already encapsulating coins identical to three of the coins in the set — two of them offered individually by the Mint as numismatic products, and the third the bullion version that enters the secondary market through the Mint’s authorized purchasers. The labels for these submissions differ from those used for coins that originate in the anniversary sets.

Officials from the top three major grading services outlined what the grading labels or inserts will look like for the coins specifically pedigreed to the 25th Anniversary set.

NGC President Rick Montgomery provided Coin World Nov. 7 with an extensive explanation of its scheduled labeling for certifying the coins in the 25th Anniversary sets.

Although NGC offers multi-coin encapsulations for some series, Montgomery said the firm is not holdering the 25th Anniversary set coins in one multi-coin holder; each coin will be in its own holder.

Each NGC label pedigreed to coins from the set will have the coin’s description superimposed over a special logo bearing the numeral 25 with a soaring eagle flying outward through the numerals. A dark blue strip reading EAGLE 25TH ANNIVERSARY appears at the bottom of the label.

According to Montgomery, the Uncirculated 2011-S and 2011-W coins will be described with an MS (Mint State) designation.

The 2011 bullion coin struck at the San Francisco Mint but without Mint mark will be described only as 2011 with the designation of MS, Montgomery said.

All coins that are received in unopened Mint packaging will receive the designation of “25th Anniversary Set,” he said.

Because some of these coins in the set are also available individually from the U.S. Mint, special instructions must be followed in order for coins to qualify for the 25th Anniversary Set pedigree and label.

Coins must remain in the sealed U.S. Mint shipping boxes as received, and the entire unopened package must be forwarded to NGC for certification.

NGC must open the sealed boxes in order for the coins to qualify for the 25th Anniversary Set pedigree, according to the NGC submission rules.

“If NGC receives the package unsealed, only the reverse proof and S mintmark coins will receive the NGC 25th label,” according to the submission rules. “All other coins will get NGC’s standard brown label with 25th Anniversary Set in the coin overprint” area of the label.

Contact NGC Customer Service by email at service@ngccoin.com or telephone at 800-642-2646 for more information on 25th Anniversary set submission rules.

A complete explanation of the NGC labeling can be found online at www.ngccoin.com/news/viewarticle.aspx?IDArticle=2409&NGC-label-for-25-anniversary-eagle-sets.

The coins must come sealed in order to receive both the “First Strike” and the “25th Anniversary Set” designation.

All five coins are eligible for First Strike designation for an additional $18 per coin.

One set option has on the obverse label the designation 25TH ANNIVERSARY SET on a black strip, with miniature image of the coin’s obverse to the left. Below appears the date, Mint mark (if applicable), Proof or Mint State grade, and First Strike designation (if applicable). The same information appears on a reverse label.

PCGS officials made a late change to their plans for the program. Don Willis, PCGS president, Nov. 10 in an announcement said: “We have received the first submissions of the 25th Anniversary Coins. The mint sealed packaging includes a Certificate of Authenticity. That certificate lists all 5 coins. In that list the bullion coin with no mint mark is reported to be minted in either San Francisco or West Point. This information conflicts with earlier reports so PCGS contacted the mint directly. We were told by a mint official that while most of the no mint coins were minted in San Francisco there is no guarantee that all of the no mint coins were minted there. Consequently PCGS cannot label the no mint coins as (S) as originally planned. Those coins are still eligible for 25th Anniversary Labels and for First Strike according to the already published guidelines.”

Tom Jurkowsky, director of the U.S. Mint’s Office of Public Affairs, reconfirmed to Coin World Nov. 11 his answer in an Oct. 12 email that the bullion coin in the set is exclusively from San Francisco Mint production. Jurkowsky said Nov. 11 that the certificates of authenticity were likely produced before U.S. Mint officials made a final decision restricting the bullion coin production for the set to the San Francisco facility.

The second option, limited to bulk services and available only through the PCGS Collectors Club bulk and dealer submissions, bears the same reverse label. For this option, the label on the side of the holder showing the obverse is inscribed 12th CHIEF ENGRAVER/OF THE U.S. MINT and “John M. Mercanti,” with the retired sculptor-engraver’s actual signature in the space below.

Mercanti designed and sculptured the Heraldic Eagle reverse that appears on the reverse of the American Eagle silver bullion coin.

Under the “Ultimate Bulk Package,” for a minimum of 20 sets, submitters will receive each of their coins numerically graded by PCGS. The insert is specially designed to showcase Mercanti’s autograph. An autographed letter from Mercanti congratulating the submitter on receiving the set will also be included. Each coin will also be eligible to receive First Strike designation. The First Strike cut-off date is Dec. 7. The grading cost for the Mercanti option is $250 per set.

Another option is a new insert specifically developed for the 25th Anniversary of the silver American Eagle. For a minimum of five sets, customers can receive each of the coins numerically graded by PCGS. Each coin will also be eligible to receive First Strike designation for coins received at PCGS by Dec. 7. This option is available for $200 per set.

Collectors with fewer than five sets may also submit their sets through the regular Collector Club services.

Additional details can be found on www.pcgs.com.

As of Nov. 8, ANACS had not yet finalized the complete label designs for the grading inserts that will be used for grading and encapsulating the five coins from the 25th Anniversary sets, according to ANACS Senior Numismatist Michael Fahey.

Fahey said “25th Anniversary Set” will appear on each label. ANACS began receiving sets on Nov. 9 for grading and encapsulation, he said.

The coins from West Point and Philadelphia were struck in late August and September, and the San Francisco coins produced in September and October, according to U.S. Mint spokesman Michael White.