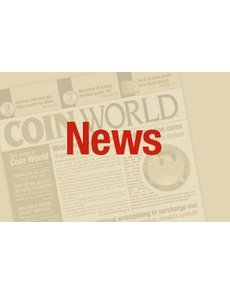 The trial that should determine who owns 10 1933 Saint-Gaudens gold $20 double eagles continued July 8 at Philadelphia’s Federal District Court, with the examination of a single witness — David Enders Tripp — the government’s expert witness in numismatics.
Tripp was hired by the government to help show that the coins were embezzled or stolen from the Philadelphia Mint.
The Langbord family, who allegedly discovered the coins in 2003 in a family’s safe deposit box, contend that they should be able to own the coins as there was a window of time where people could legally obtain 1933 double eagles from the Mint cashier.
The jury was brought in at about 9:20 a.m. and the government called Tripp as its first witness. Tripp — an archaeologist turned numismatic consultant, research and writer who later served as the head of Sotheby’s coin department — is author of the 2004 book Illegal Tender: Gold, Greed and the Mystery of the Lost 1933 Double Eagle. He stressed the importance of provenance, or a coin’s prior ownership history, as both providing historic context and to establish value.
Tripp said that he started looking at archival material in the late 1970s, and that he used archival sources in the 10 years he spent preparing his work. When the government tried to formally present Tripp as an expert on the 1933 double eagle, Barry Berke, the lead attorney for the Langbords, objected, arguing that Third Circuit custom does not support such a specific statement. The jury was then dismissed as Judge Legrome D. Davis’ microphone was not working properly, and when the jury re-entered, the Langbords’ objection was overruled.
Judge Davis defined the role of the expert witness for the jury, stressing that just because an expert has a particular qualification does not mean that the jurors must believe everything that the expert says.
Tripp framed his testimony in the history of the Philadelphia Mint, telling the jury that “You can’t look at 1933 double eagles in a historical vacuum,” and framing the 1933 double eagle in the context of the economy at the time, which he said was “in absolute freefall.”
He passed out a 1907 Saint-Gaudens double eagle for the judge and jurors to examine, noting that the only differences between that and the 1933 and 1907 coins is the date and the addition of “In God We Trust” on the reverse.
Introduced into evidence was a floor plan of the Philadelphia Mint’s basement, which held the vaults and cages. Mint cashier daily statements were described in detail, and attorneys for the Langbords objected to several pieces of evidence related to Franklin Roosevelt’s March 6, 1933, order that called for people to turn in their gold coins, and subsequent events related to it.
Tripp characterized a March 7, 1933, wire from an assistant attorney general that said Mint supervisors could continue exchanging gold for gold coins as an orphan document. When asked to describe an orphan document, Tripp said it was akin to presenting only one side of a conversation, and to treat it with caution.
Tripp described the assay process — where the purity of coins was assessed through a destructive process — and said that two coins were selected at random from coin deliveries. A calendar was shown depicting all the 1933 double eagles’ movements from January 1933 to October 1934.
At this point the jury was dismissed and Judge Davis reminded the attorneys for both sides that it is important for them to use the jurors’ time well and to avoid objecting to things that have previously been objected to and overruled.
The trial is scheduled to continue on Monday, July 11. ¦