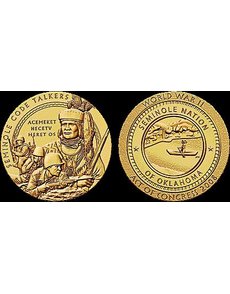 Bronze duplicate version of the gold medal presented to the Seminole Nation of Oklahoma. The obverse depicts Seminole Nation code talkers. In the background is Chief Billy Bowlegs, a leader of the Seminoles in Florida before moving to the Oklahoma Territory. 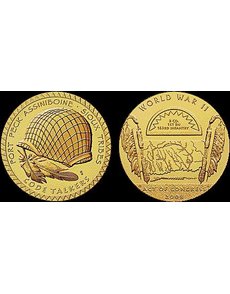 Congressional gold medals containing nearly $690,000 in gold were presented Nov. 20 to representatives of 25 Native American tribes whose members served as military code talkers during World Wars I and II.

The public ceremonies at the U.S. Capitol Visitor’s Center’s Emancipation Hall in Washington, D.C., also paid tribute to the code talkers from eight other tribes for which either the medals had not yet been struck or designs are not yet approved.
Following the gold medal presentation, separate private ceremonies were held at the Smithsonian Institution’s National Museum of the American Indian for presentation of individual silver versions of the gold medals to 216 surviving code talkers, family members or designated representatives.
The U.S. Mint did not photograph either the gold or silver versions of the medals, citing security issues specifically for the gold medals because of their value.
The 25 gold medals presented Nov. 20 were displayed under Mint Police guard for Mint employees to see Nov. 18 from 11 a.m. to 1 p.m. in the eighth floor board room of U.S. Mint headquarters in Washington, D.C.
All of the 33 Code Talker medals are being issued under provisions of the Code Talkers Recognition Act of 2008, Public Law 110-420.
The Navajo Code Talkers were honored with a congressional gold medal in 2000 under the Navajo Code Talkers Congressional Gold Medal Act, Public Law 106-554.
According to U.S. Mint spokesman Michael White, the weight, diameter and thickness of each medal version varies slightly due to the manufacturing process.
Each of the 3-inch gold medals is composed of .9995 fine gold, with an approximate weight of 21.69 troy ounces, and is about 0.275 inch thick. Using a Nov. 19 spot price of $1,271.50 per troy ounce of gold, each medal is worth $27,578.84 in gold value alone.
Each 3-inch .999 fine silver medal is 0.25 inch thick and weighs 10.55 ounces. With a spot price of $20.24 per troy ounce, each silver medal contains $213.53 worth of silver.
Two bronze versions of each medal are being made for public sales. A 3-inch bronze medal is composed of 90 percent copper and 10 percent zinc; it is 0.275 inch thick and weighs 9 ounces. A 1.5-inch bronze medal is composed of 95 percent copper and 5 percent zinc; it is 0.1 inch thick and 0.8 ounce in weight.
Recipients of the medals
The 25 nations and tribes that received gold medals Nov. 20 were:
??Cherokee Nation.
??Cheyenne River Sioux Tribe.
??Choctaw Nation.
??Comanche Nation.
??Crow Creek Sioux Tribe.
??Fort Peck Assiniboine and Sioux Tribes.
??Ho-Chunk Nation.
??Hopi Tribe.
??Kiowa Tribe.
??Meskwaki Nation.
??Muscogee Creek Nation.
??Oglala Sioux Tribe.
??Oneida Nation.
??Osage Nation.
??Pawnee Nation.
??Ponca Tribe.
??Pueblo of Acoma Tribe.
??Santee Sioux Nation.
??Seminole Nation.
??Sisseton Wahpeton Oyate (Sioux) Tribe.
??Standing Rock Sioux Tribe.
??Tlingit Tribe.
??Tonto Apache Tribe.
??White Mountain Apache Tribe.
??Yankton Sioux Tribe.
Future medals will recognize the following:
??Menominee Nation.
??Cheyenne and Arapaho Tribe.
??Rosebud Sioux Tribe.
??Fond du Lac Band of Lake Superior Chippewa.
??Crow Nation.
??Mohawk Tribe.
??Laguna Pueblo Tribe.
??Lower Brule Sioux Tribe.
The tribes with the most silver medal recipients were the Fort Peck Assiniboine and Sioux Tribes with 51 medals, and the Standing Rock Sioux Tribe with 47 medals.
Public Law 110-420 includes provisions that permit recipient tribes or individuals to present medals to the National Museum of the American Indian. The NMAI has an extensive exhibit on display dedicated to the code talkers and their contributions transmitting battlefield communications in their native languages that could not be deciphered by the enemy.
Gold medal ceremony
Several of the speakers at the gold medal presentation ceremony, including Speaker of the House John Boehner, spoke of the sacrifices the code talkers made during their military service. Boehner spoke specifically of Edmond Harjo, 96, a code talker from the Seminole Nation of Oklahoma, who was in attendance at the ceremony and accepted the gold medal on behalf of the tribe.
Before Boehner presented his comments, he was moved to tears by the remarks delivered during the invocation by Barry C. Black, chaplain of the U.S. Senate.
Black spoke of the long-overdue recognition for the code talkers’ contributions during two world wars. Black noted that Native Americans that served in the U.S. military during World War I were not even considered U.S. citizens. That right wasn’t granted until the Indian Citizenship Act of 1924.
None of the code talkers who served during either world war could discuss the missions executed during their military tenure since those missions remained classified until 1968.
Bronze duplicates
The Mint is offering collectors the bronze duplicates of the presented Code Talker medals, with each 3-inch medal offered at $39.95 and each 1.5-inch medal priced at $6.95.
Obverse and reverse images of the 25 bronze duplicate medals and ordering information can be found at www.usmint.gov.