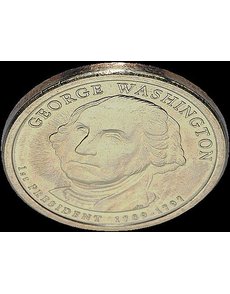 As more George Washington, Plain Edge, Presidential dollars were found, values dropped. Will the possibility of the Mint producing fewer error dollars bump up the price for existing error pieces?

For collectors, the news that the U.S. Mint has tested new minting procedures intended to eliminate potential errors, including “mules” (a wrong pairing of dies in a coinage press) and edge lettering errors, is both welcome and disheartening.

It is welcome, as it shows the Mint is taking tangible steps to improve its product.

It is disheartening because, if successful, likely fewer error dollars will enter the marketplace.

While many hobbyists will continue to collect the dollars as they have done since 2007, some may lose interest. After all, one of the thrills of collecting these dollars has been the hunt for pieces missing their edge lettering, or with other errors, when searching through coin rolls or bags.

As happens whenever a new series is released, hobbyists and dealers tend to pay large amounts of money for the first error pieces. Prices approaching $1,000 were paid for some high grade examples. However, values slid downward as more and more identical errors were found. For Washington, Plain Edge pieces, prices went from many hundreds of dollars each to the point where a collector can now easily purchase a certified Mint State example for $100 or less. A lot are on the market, with 20,000 plain edge examples graded by Professional Coin Grading Service and more than 42,000 graded by Numismatic Guaranty Corp.

If the Mint’s future Presidential dollar strikes are untroubled by errors, will hobbyists see a “bump” in the value of existing error pieces?

For the “common” error dollars, such as the Washington Plain Edge, it is not likely. The market is well supplied and other enticing errors are competing for collector attention.

Even scarcer errors, like a Satin Finish 2008 James Monroe, Plain Edge dollar, are selling for reasonable prices. Heritage Auction Galleries sold a PCGS-graded MS-68 example for $431.25 June 1 — not an especially high price for an error with a total PCGS population of 63 pieces across all grades. Is now a good time for enthusiasts to buy an example? ¦