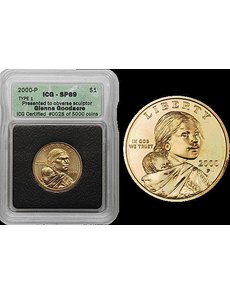 The record price paid for a Glenna Goodacre Presentation version of a 2000-P Sacagawea dollar is $6,325 for an ICG Specimen 69 piece offered at a 2011 Heritage auction.

The first year of issue of the Sacagawea dollar includes three of the most noteworthy modern U.S. coins, namely the 2000-P “Cheerios” dollar, the 2000-D Millennium set dollar and the 2000-P Goodacre Presentation dollar. The last of these tells a fascinating and unique story, and 12 years later still retains a bit of controversy.

Sculptor Glenna Goodacre designed the obverse of the Sacagawea dollar. As a non-Mint employee, she earned a $5,000 fee for her work. She elected to receive her payment in the form of 5,000 Sacagawea dollars. Mint Director Philip Diehl flew to Santa Fe, N.M., to hand deliver the coins to her on April 5, 2000.

In August 2000, Goodacre contracted with Independent Coin Grading Co. to encapsulate her coins without grade in a numbered edition. When ICG examined the coins, they discovered that they possessed a deep mirror-like sheen and had clearly been specially prepared. Not only did the coins presented to Goodacre have a special provenance, but they were visually distinct.

Perhaps to avert any criticism, the Mint denied that Goodacre’s coins were special. The same AP article quotes U.S. Mint spokesman Michael White: “Nothing special was done. If you bought the standard uncirculated set, they are the same coins produced the same way.”

But, of course, there’s more. Not all 5,000 of Goodacre’s coins possess a deeply mirrored surface.

While also specially produced and handled, a small number have a more delicate satin finish. New research conducted by NGC has determined that these coins are an early die state that accounts for less than an estimated 5 percent of the total number of Goodacre dollars. The dies were then re-
polished and employed to produce the remaining coins.

The values of 2000-P Goodacre Presentation dollars do seem to experience a bit of volatility.

The ungraded, numbered-edition coins trade at auction for about $500. Most examples grade between Specimen 65 and Specimen 68. Specimen 67 examples currently trade for $1,200. Attributed Early Die State examples are worth much more — the auction record belongs to an ICG Specimen 69 piece sold by Heritage Auctions on Nov. 9, 2011, for $6,325.