The Joys of Collecting: Many factors fuel market boom 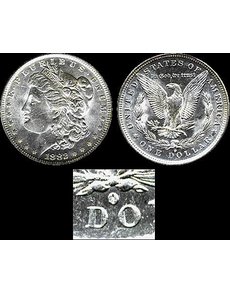 This 1882-O/S Morgan dollar is Mint State 64 because Professional Coin Grading Service certified it as such. You can buy it with confidence.

In 2013 the market is stronger than I have ever seen it. And yet, the greatest boom years of the hobby were 1960 to 1964, followed by a crash that resulted in the majority of coin shops in the United States closing their doors forever and millions of people exiting the field.

Why have we been so lucky?

Actually, luck doesn’t have much to do with it. Several well-planned factors have combined to give the rare coin market a very good foundation — more so today than ever before.

I will start by mentioning certified grading. Time was when if Dealer A of good reputation called a 1793 Flowing Hair, Chain, AMERI. cent Very Fine 30, another respected dealer might call it Extremely Fine 40, and a long-time specialist might suggest VF-20. That changed with the founding of the Professional Coin Grading Service in 1986 and Numismatic Guaranty Corp. in 1987. Today PCGS and NGC reign supreme in the business, with several other grading services active as well.

More than 100 other services opened, did business briefly, then disappeared. If that 1793 cent is certified as VF-35 by either PCGS or NGC, most buyers will accept that grade without question.

Grading is, was, and always will be largely a matter of opinion. This is no more evident than by the situation that the same grading service can view an identical coin two different times, and grade it differently. More than just a few dealers and others make large profits by gaming the system —buying a certified MS-64 coin and resubmitting in multiple times in the hope it will come back MS-65 or -66. Sometimes it will. Sometimes it won’t. The grading fees are trivial in comparison to the profits if you hit a home run.

However, for 95 percent of the people interested in buying coins, the label on a holder serves as a benchmark of its grade. Moreover, someone can discover Morgan dollars, Liberty Head 5-cent coins, Saint-Gaudens gold $20 double eagles on Tuesday, and on Wednesday, with just a market guide in hand, spend $500, $5,000, $50,000 or whatever, without much fear of making a mistake.

As a corollary, someone who sells real estate, cars, stock or snake oil can become an instant “professional rare coin dealer” when given a A Guide Book of United States Coins for general information, one or more market guides to prices, and a box filled with certified coins. The hobby has absolutely no licensing requirements.

Certification has made coin buying easier, safer, and has nearly completely removed the time-honored controversy of grading.