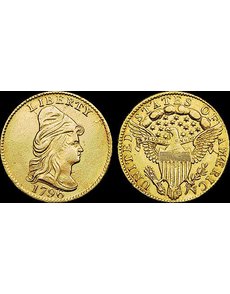 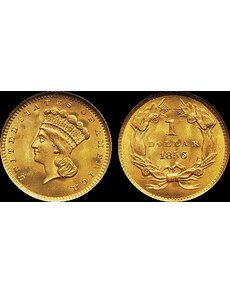 Two collections of U.S. gold coins will be offered in the Jan. 26 to 28 auction in Los Angeles by Ira & Larry Goldberg Auctioneers.

One of the collections has been stored in a bank for more than four decades. The other is a hoard of more than 200 certified examples of the same gold dollar variety.

The Del Valle Collection features nearly 80 U.S. gold coins comprising $2.50 quarter eagles, $3 coins, $5 half eagles, $10 eagles and $20 double eagles that were locked in a Beverly Hills safety deposit box for more than 40 years. The coins have since been certified by either Professional Coin Grading Service or Numismatic Guaranty Corp.

The Goldbergs auction will also include two lots comprising 216 examples of the 1856 Indian Head, Upright 5 gold dollar. One lot will contain the finest known certified example, graded MS-66 by NGC. The remaining 215 examples of the variety will be offered in a single lot.

The 1856 gold dollar is known by coins struck with an obverse die where the 5 in the date is either slanted or upright.

According to the Goldbergs, the unidentified consignor was advised by a noted coin dealer in 1996 to focus in one collecting area.

Instead of a particular series or denomination, the consignor zeroed in solely on the 1856 Indian Head, Upright 5 gold dollar, according to the firm.

The consignor estimates the hoard reflects 75 percent of the surviving population of Upright 5 gold dollars.