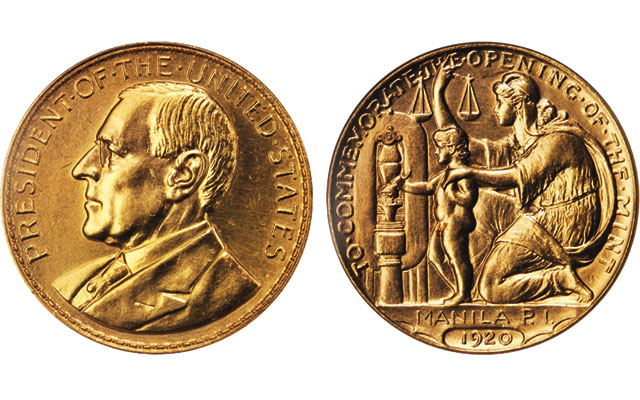 Only five examples of the 1920 Woodrow Wilson so-called dollar medal were struck in gold in recognition of the opening of the Manila Mint.

One of only five 1920 Wilson so-called dollar medals struck in gold to celebrate the opening of the Manila Mint is coming to auction Feb. 5.

Graded by ANACS as Uncirculated Details - Cleaned, Net MS-60, the medal is attributed as HK-1031 as attributed in So-Called Dollars by Harold E. Hibler and Charles V. Kappen, revised and edited in the second edition by Tom Hoffman, Dave Hayes, Jonathan Brecher and John Dean.

The 1920 Wilson so-called dollar is one of 2,756 lots to be offered Feb. 5 and 6 by Stack’s Bowers Galleries in their February 2015 Americana Auction.

The public auctions sessions will be held in Stack’s Bowers’ galleries at 110 W. 57th St. in New York City. Additional lots are being offered Feb. 10 by online bidding only.

The United States held sovereignty over the Philippine Islands from December 1898 to July 4, 1946, with Philippine coinage struck at the Philadelphia and San Francisco Mints from 1903 through 1919.

Engineer Clifford Hewitt, who supervised the Manila Mint’s construction, arranged for production of 2,200 of the Wilson dollars in silver, 3,700 in bronze and only five presentation pieces in gold.

The Wilson designs were crafted by Hewitt, with the die engraving executed by U.S. Mint Chief Engraver George T. Morgan.

The Hibler-Kappen book indicates that one of the gold medals was presented to President Wilson, one to Secretary of War Newton D. Baker, and three retained in the Philippines where they were reported lost during World War II.

The Stack’s Bowers auction lot description identifies three gold Wilson medal submissions to Numismatic Guaranty Corp. and one to Professional Coin Grading Service. The Stack’s Bowers lot is believed to be one of the pieces reported missing during the war, according to the firm.