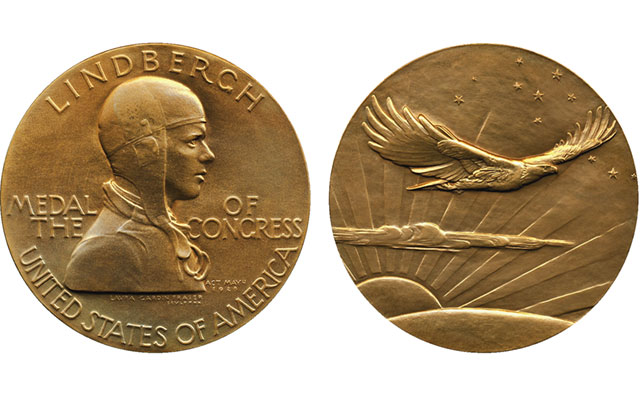 This bronze medal duplicates the designs of the Lindbergh congressional gold medal, designed and sculptured by Laura Gardin Fraser. 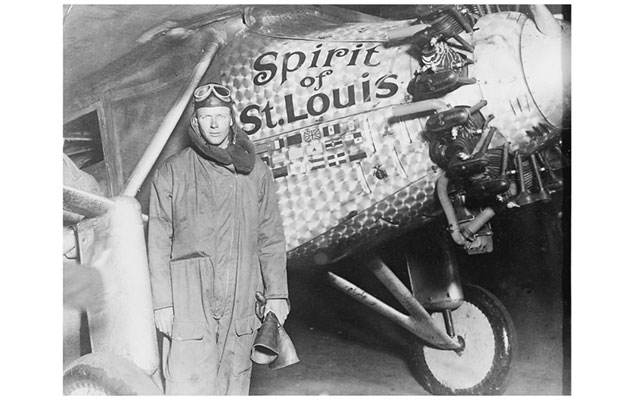 Lindbergh stands next to the Spirit of St. Louis. The plane currently resides at the Smithsonian Institution’s Air and Space Museum. 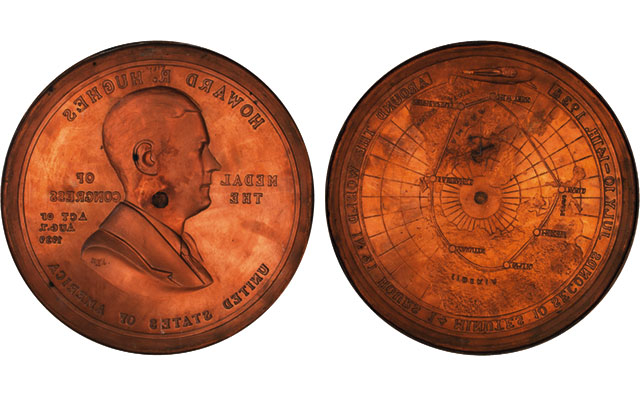 The U.S. Mint’s original copper galvanos used in the preparation of dies to produce the Howard Hughes medals. The reverse recognizes Hughes’ 1938 achievement in circling the globe.

This is the sixth in a series of articles on congressional gold medals struck by the U.S. Mint:

Several congressional gold medals have been issued honoring the contributions to aeronautics and space by their respective recipients.

Lindbergh was recognized for his achievements in aviation.

Lindbergh completed the first solo nonstop flight across the Atlantic Ocean on May 20 to 21, 1927, in his custom-built, single-engine, single-seat monoplane, Spirit of St. Louis.

The medals obverse features a portrait of Lindbergh, facing right, in aviator’s garb. The reverse shows an eagle in flight as the sun rises over the horizon.

Examples of the bronze duplicate medals occasionally appear at numismatic auctions, on eBay and at other auction sites. At the time of this writing, eBay featured a number of the 2.75-inch medals priced between $40 and $50 with Buy It Now options.

Howard Hughes — an American aviator, aircraft engineer, industrialist, film producer, film director, and philanthropist — was recognized for achievements in “advancing the science of aviation and thus bringing great credit to his country throughout the world.”

The medal’s obverse depicts a portrait right of Hughes. The reverse captures a rendition of the global route Hughes flew around the world in 91 hours, 14 minutes, 10 seconds from July 10 to 14, 1938.

Hughes’ medal was ready for presentation in 1941, but Hughes never traveled to Washington, D.C., to formally receive his medal from President Franklin D. Roosevelt.