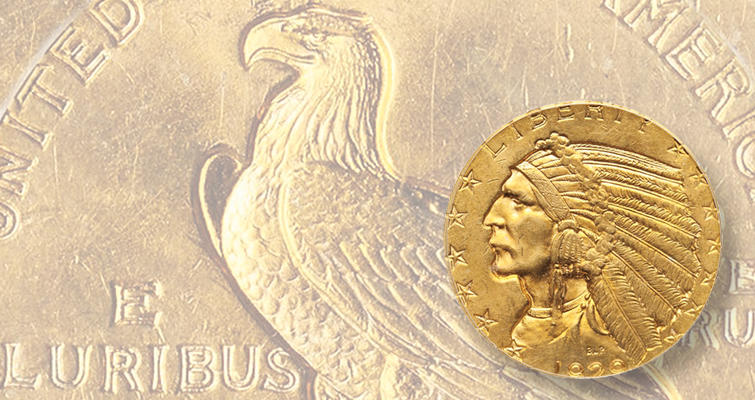 The 1929 Indian Head $5 gold eagle was being struck at the Philadelphia Mint as the nation was on the edge of financial collapse. 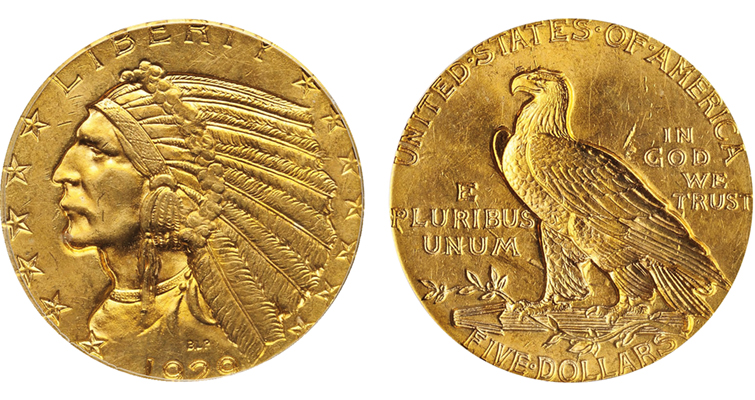 Most of the Philadelphia Mint's production of 662,000 1929 Indian Head gold $5 half eagles ended up being melted pursuant to a presidential executive order. 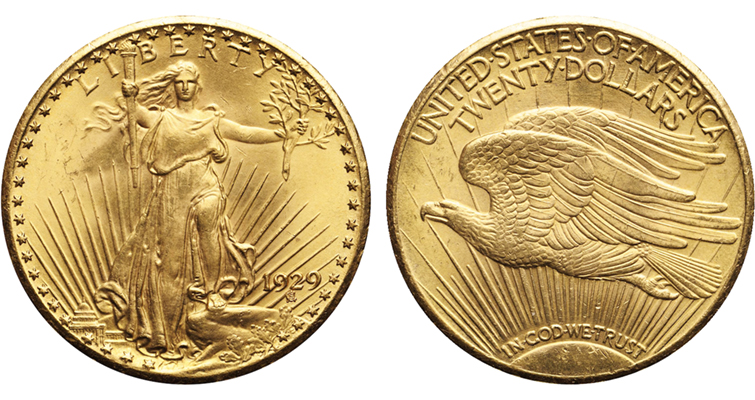 Slightly less than 1.8 million Saint-Gaudens gold $20 double eagles were struck at the Philadelphia Mint in 1929, but only a fraction of that mintage survives today. 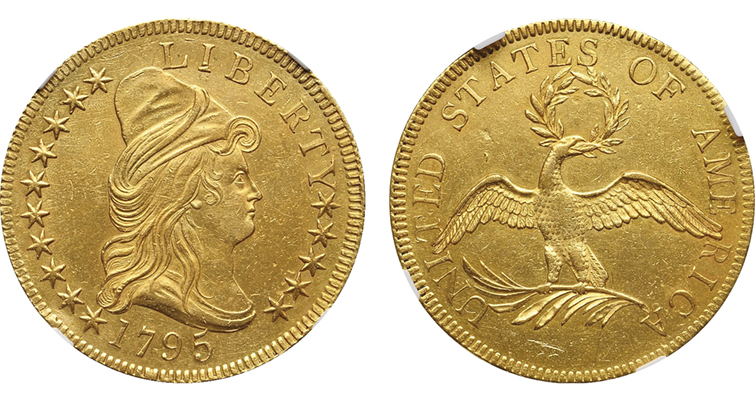 The 1795 Capped Bust, Small Eagle gold $10 eagle with 13 Leaves on the palm branch below the eagle is believed to have been produced before the 9 Leaves variety. 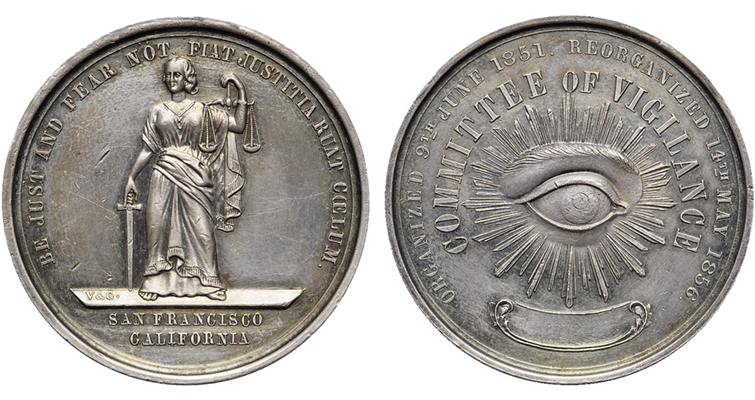 The circa 1856 San Francisco Committee of Vigilance silver medal is one of just 20 examples known to exist today.

Despite the American economy being on the verge of collapse in 1929, the Philadelphia Mint was still churning out Indian Head gold $2.50 quarter eagles, $5 half eagles and $20 doubles eagles.

Bonhams' Sept. 14 auction in Los Angeles of 384 lots of coins and medals includes an example of the half eagle and double eagle from 1929, the New York Stock Market crashed.

The sale also includes a number of early United States gold coins. Also among the highlights is a circa 1856 San Francisco Committee of Vigilance medal struck in silver.

A 17 percent buyer's fee will be added to the final closing hammer price of each lot won.

While its reported mintage of 662,000 1929 Indian Head half eagles struck at the Philadelphia Mint does not suggest a rarity, the Gold Reserve Act of 1934 made most private ownership of gold illegal — citizens could keep up to $100 face value in gold coins and coins with numismatic value were exempt. The majority of the 1929 mintage, like many other gold issues, was either not released or was turned in to the Treasury and subsequently melted.

Most known examples of the 1929 half eagle are found in Mint State condition.

The example offered in the Bonhams auction is graded MS-62 by Professional Coin Grading Service. The coin carries a pre-sale estimate of $25,000 to $30,000.

The Philadelphia Mint recorded output totaling 1,779,500 coins for the 1929 Saint-Gaudens double eagle. The facility's production in 1929, 1931, 1932, and 1933 was not required in commerce, and very few exited the Mint for passage into general circulation. Most of the production went to Treasury vaults for storage.

President Franklin D. Roosevelt's gold recall executive order in 1933, in an effort to reverse the nation's economic woes, included provisions for the U.S. Mint to not release any more gold coins into circulation and to destroy the gold issues stored in government vaults or any that were returned to federal control.

"Numismatic scholars are generally agreed that much of the original mintage of 1929 double eagles was destroyed as a result of this presidential order," according to the auction lot description.

The reported mintage of 5,583 coins included reverse varieties with either 9 leaves or 13 leaves below the eagle. The Bonhams sale includes the 13 Leaves variety.

The coin offered in the Bonhams auction is the BD-1 variety (as attributed by John Dannreuther and Harry W. Bass Jr. in Early U.S. Gold Coin Varieties: A Study of Die States, 1795-1834). Bass concluded that the BD-1 was the first of the 12 1795 Small Eagle varieties that were struck using an eventual eight obverse and eight reverse dies.

Of the reported mintage, 5,083 are estimated to be of the 13 Leaves Below Eagle variety and approximately 500 are of the 9 Leaves Below Eagle design, according to Jeff Garrett and Ron Guth in Encyclopedia of U.S. Gold Coins 1795-1933.

The 1795 Capped Bust, Small Eagle, 13 Leaves $10 coin in the Bonhams sale is identified as being certified by Numismatic Guaranty Corp. as Uncirculated Details, Improperly Cleaned. The coin has an estimate of $55,000 to $65,000.

Accompanied by an authentication letter from the American Numismatic Association Authentication Bureau, the About Uncirculated silver medal is one of fewer than 20 examples known. It measures 37.1 millimeters in diameter and weighs 26.219 grams.

The San Francisco Committee of Vigilance was founded in 1851 and revived five years later in response to rampant crime and corruption among the ranks of city government. The committee boasted a membership of some 700, operating separately from the duly established municipal entity.

The medal — with Lady Justice without blindfold on the obverse and the All-Seeing Eye with rays at center on the reverse — was executed by the San Francisco concern of Vachon & Giron. The firm's V&G hallmark appears on the left of the base on which Lady Justice stands.

While the All-Seeing Eye motif is adapted from Freemasonry, "in its 1856 vigilante context, [it] conveyed surveillance as a means of social discipline, not the Masonic meaning of scientific and aesthetic knowledge," according to the auction lot description.

According to the auction lot description, "As a result of their actions, these militias subsequently hanged eight people and forced several elected officials to resign."

For more information on the sale, visit the Bonhams website.