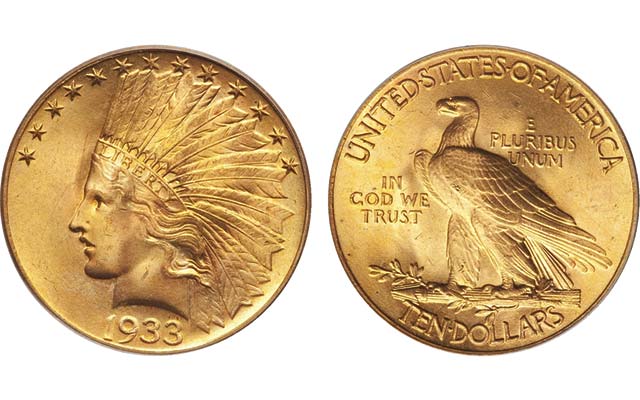 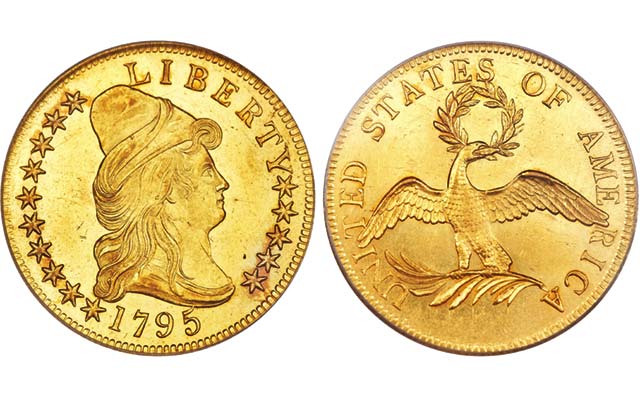 The 1795 Capped Bust, Small Eagle, 13 Leaves eagle is from an estimated mintage of 5,083 coins struck at the U.S. Mint in Philadelphia. 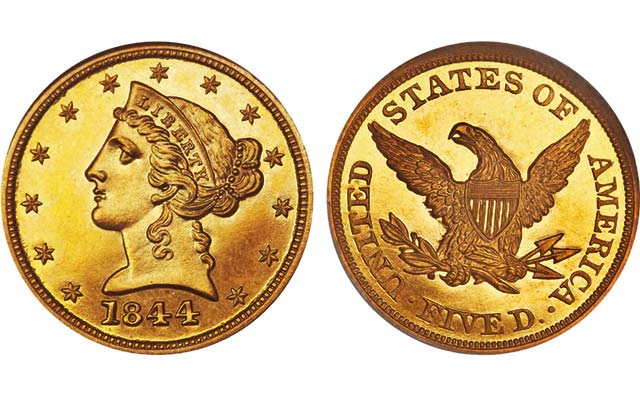 The 1844 Coronet $5 half eagle struck in Proof is known by just two examples. This piece was once in the collection of numismatist John J. Pittman.

The April 22 to 27 auction is being held in conjunction with the Central States Numismatic Society Convention at the Renaissance Schaumburg Convention Center.

While federal courts ruled in 2011 that 1933 Saint-Gaudens $20 double eagles were never officially released to the public, such cannot be said of the 1933 Indian Head eagle.

But like the 1933 gold double eagle, the bulk of the 1933 eagle production found itself in the melting pot after President Franklin Roosevelt’s gold confiscation executive order of April 5, 1933.

Only a small number of the 1933 eagles made it into circulation or collector channels before the presidential edict. Most of the 312,500 Indian Head $10 eagles were melted.

Numismatic experts estimate that only 25 to 30 examples of the issue exist, with most in the condition in which they were struck.

As a whole, the 1795 date is the most common among the Small Eagle issues, according to Jeff Garrett and Ron Guth in Encyclopedia of U.S. Gold Coins 1795-1933.

The 1795 eagle is found in two major subtypes — the 13 Leaves subtype and the 9 Leaves subtype, based on the number of leaves on the palm branch where the eagle is perched.

The 13 Leaves subtype is considered the more common.

The 13 Leaves subtype is known by four die varieties. The example being offered in the Heritage sale is attributed as Bass-Dannreuther 1. Authors Harry Bass Jr. and John Dannreuther estimate that 225 to 325 pieces of the BD-1 variety exist.

The Proof 1844 Coronet half eagle offered in the sale is the only example in private hands. It was once in the collection of famed numismatist John J. Pittman.

The only other example known is held in the National Numismatic Collection at the Smithsonian Institution.

While the number of Proof 1844 Coronet half eagles struck is unknown, researchers do know that both were included in original 1844 Proof sets.

The example in the National Numismatic Collection has been part of the Mint Cabinet, which forms the foundation of the U.S. portion of the NNC, since the coin’s time of issue.

Pittman purchased his Proof 1844 Coronet half eagle in the 1948 Numismatic Gallery sale of the J.F. Bell Collection for $140.

The coin was sold Oct. 21 to 23, 1997, in Part One of the David Akers Numismatics Inc. sale of the Pittman Collection.

Housed in its original case of issue, the set contained 10 coins denominated from half cent through eagle.