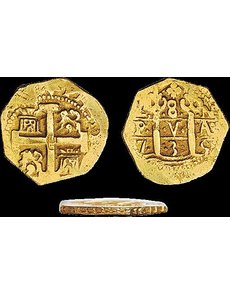 Among gold Colonial coins is the unique 1735 imitation Lima 8-escudo coin with Standish Barry (SB) countermark at the center of the cross on the obverse.

In January it was announced that items from the Eric P. Newman Numismatic Education Society will be offered for sale at some future time. The mind races at the thought of what the collection contains. For enthusiasts of Colonial-era coins, this could be the most important offering ever.

Details of what the Newman Collection contains are not particularly well known to most in the numismatic community, but the star of the collection, perhaps Mr. Newman’s favorite coin, has been well published and much discussed — the gold 1792 Washington President pattern. The thought of what it could sell for, undoubtedly in the millions, brought to mind a question: What other gold Colonials are there (not necessarily in the Newman Collection)?

The most famous, of course, are the Brasher doubloons. Two types are known: the very rare Lima-style Brasher doubloon and the New York-style, copying the seal of the state of New York and showing a Federal-style eagle on the other side.

Two Brasher Lima doubloons are known, both closely copying the designs of 8-escudo coins struck in the Spanish Colonial mint at Lima, Peru.

Seven of the New York style Brasher doubloons were struck in 1787 and marked by Ephraim Brasher with his distinctive EB touchmark. Recent prices for the Brasher doubloons approach $3 million at auction and significantly more in private sales.

One particularly exciting analog of the Brasher doubloons is the unique Standish Barry doubloon. Made by Baltimore’s most famous silversmith minter, I got to be the first person to identify the piece during the process of analyzing and cataloging the Eliasberg Collection of world gold coins, where it had hidden for decades as nothing more than an 8-escudo coin from Peru. It’s already earned a spot in Q. David Bowers’ Whitman Encyclopedia of Colonial and Early American Coins.

There also exists a gold Saint Patrick farthing, a piece sold in Part VII of the John J. Ford Jr. Collection auction, bringing a winning bid of $184,000. As cool as that piece is, it’s tough to equate a high grade off-metal striking of a piece intended for Ireland with other coins listed above, which were made in America for circulation in America.