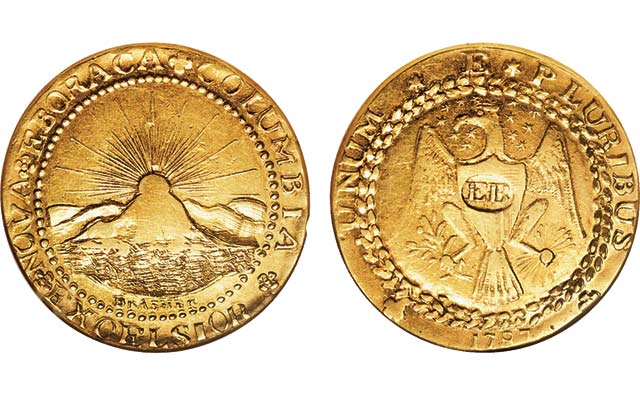 A Brasher gold doubloon of 1787 bears the EB hallmark of New York goldsmith Ephraim Brasher on the eagle’s breast.

The Joys of Collecting column from the June 22, 2015, issue of Coin World:

By the time that the American Colonies had their beginning with the settlement of Jamestown in 1607, gold coins had been used in world commerce for about 2,000 years, starting with ancient Lydia.

In 1537, the Spanish doubloon or 8-escudo coin had been defined as 27.4680 grams of pure gold, or 22 karats. In time, doubloons and their fractional parts were also made in Spanish-controlled countries from Mexico to South America.

The Mint Act of April 2, 1792, specified the weight and fineness of coins to be struck at the planned federal Mint in Philadelphia.

Although scattered finds of gold had been made in the United States by that time, there were no commercially worked deposits. That did not happen until the “gold rushes” into North Carolina and Georgia in the 1820s and 1830s. In the meantime, gold for jewelry and other purposes was mainly from melted-down foreign coins.

In the early days gold was important in commerce — not only doubloons and their fractional parts, but guineas from Great Britain, ducats from Venice, and coins from other locations all circulated. As these often varied in weight and purity (a doubloon from Peru might be slightly different from one minted in Chile or Mexico or Spain, for example), guides called “cambists” were published regularly that listed exchange rates.

Many of the metropolitan newspapers had “prices current” columns giving the value of foreign coins, often reckoned in pounds, shillings and pence before American dollars came into widespread use.

The first gold coins struck in what is now the United States are thought to have been the doubloons or coins worth nearly $16 made from dies dated 1786 and 1787 by Ephraim Brasher, a prominent New York City silversmith and goldsmith.

Brasher’s coins were made for reasons unrecorded.

Perhaps he took scrap gold and made it into circulating coins of two different designs.

Standish Barry, of Baltimore, also made a coin in imitation of a Spanish-American doubloon.