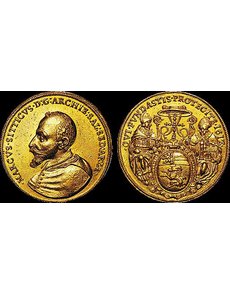 Eric and Evelyn’s love of travel led to numerous adventures, and stops in exotic locales were often remembered with world coin purchases. Their travel trunk with its many colorful labels serves as evidence of their far-flung travels.

Heritage Auctions’ third installment of the Eric P. Newman collection featuring world coins brought just over $6 million when offered at a Jan. 14 to 16 sale in New York City. Added to the first sale at April 2013 and the second sale in November, that brings the total for the three Newman auctions to more than $33 million.

The introductory essay, “Around the World in 102 Years: From Afghanistan to Zanzibar” helped place the coins in the context of Eric and Evelyn Newman’s 74 years of marriage, during which they have visited more than 150 countries.

On their first journey together in December 1939, while on their honeymoon cruise, they witnessed the scuttling of the German battleship Graf Spee in Montevideo’s harbor. It was the culmination of the first active battle of World War I.

Most of their voyages included acquiring coins for the numismatic collection.

“The Eric P. Newman Collection is without a doubt the finest on Earth, and it is thrilling to see collectors respond when treasures like the 14 ducat appear,” said Cristiano Bierrenbach, Executive Vice President of International Numismatics at Heritage. “This collection is highly nuanced and complex in its approach, and bidders understand why it’s important to add these selections now.”

The top lot in the sale was a gold 14-ducat
piece dated 1612 from Salzburg, Austria, depicting Markus Sittikus Graf von Hohenems who was elected Archbishop of Salzburg in 1612. He is perhaps best known for commissioning architectural projects in a Baroque style, many of which remain today and give Salzburg its distinctive character.

It’s a mysterious coin, described in the catalog as, “a complete enigma of a type” and the coin — unique, or very nearly so — was termed a “once in a lifetime” opportunity. Graded About Uncirculated 58 by Numismatic Guaranty Corp., suggesting that it may have served its purpose briefly in commerce, it brought $211,500 against an estimate of $50,000 to $75,000.

A German gold 10-ducat piece of Saxe-Altenburg dated 1652 and graded AU-58 brought $105,750. Described as an “Incredibly Rare Baroque Masterpiece” the coin is likely one of only a few survivors from a small issue.

The obverse depicts Duke Friedrich Wilhelm III who became heir to the duchy of Saxe-Altenburg on the passing of his older brother Christian in 1663. He became duke at age 12 when his father died in 1669, and he died in 1672. The branch of Saxe-Altenburg became extinct with his death.

Among the more dramatic coins in the sale was an octagonal gold 1653 3-ducat piece from the German State of Breslau depicting King Ferdinand of Poland. It is perhaps best characterized by a sharp strike that fully delineates the hair and details of the obverse.

Today, Breslau (known as Wroclaw) is the largest city in western Poland, with a population of more than 600,000 people. It has been variously under the control of Poland, the Austrian Empire, Prussia and Germany during the past 500 years.

While the bulk of the highlights of Newman’s world holdings in the recent sale were pre-19th century, the auction had some 19th and 20th century standouts, including a Proof 68 40-centavo piece from the Republic of Cuba dated 1915. It’s one of the finest known from a mintage of just 100 Proof strikes and brought $25,850 against an estimate of $6,000 to $8,000.

Although not an especially rare piece, it is often found mishandled as a result of being stored in presentation cases, allowing contact with other coins.

Another coin featuring Queen Victoria was an 1866 Proof 64 dollar struck for Hong Kong that brought $64,625. In 1865, Hong Kong had a population of 125,504 including 2,000 Americans and Europeans. The dollar, produced under British authority at the Hong Kong Mint, was struck for just three years: 1866, 1867 and 1868. The lot description added, “As a type, the issue is truly transcendent in the annals of world coinage and, for most collectors, even a lesser example would immediately become a collection cornerstone.”

Beyond coins, Newman III featured a select group of choice medals. Among the more visually interesting pieces was a 1688 silver medal from the era of James II, king of England, Ireland and Scotland from 1685 to 1688.

The obverse depicts William Sancroft, Archbishop of Canterbury from 1677-90, and the reverse shows medallic images of his bishops. The historic medal relates to King James II’s split with the Anglican Church as he converted to Catholicism. The description adds, “This medal was created literally on the cusp of the moment of change from James II to William & Mary, when the Church of England remained forever forward Anglican.” Graded MS-63, it brought $1,116.25 against an estimate of $400 to $600.

Another dramatic piece was a 1693 silver medal depicting King William III in armor, facing right, in high relief. The reverse shows a falcon dropping in mid-air upon a heron, with an intricate battle scene beyond.

The catalog aptly describes the context of this medal struck during the Nine Years’ war where William III was ultimately unsuccessful in defending his troops against an attack from the French army, writing, “William III issued a ‘victory’ medal in which he is depicted as a Roman emperor in full attire, and symbolically the fierce ‘English falcon’ trounces the more docile ‘French heron.’ However, the artist clearly shows the heron’s long beak pricking the falcon in its soft underbelly. No one could wish for a more dramatic, sharply detailed portrait of King William, nor a more ironic metallic memento.” The MS-63 medal sold for $4,993.75.

Selections from the Eric P. Newman Collection of World Coins will continue to be offered in five online monthly events starting Feb. 27, 2014, with the last auction event concluding the last week of July 2014.

These will include more than 1,500 additional coins from the collection, separated by geographical region from Central and Eastern Europe to the British Isles to the Americas, Africa, Asia and Oceania.

The next Newman sale featuring U.S. material will focus on Newman’s holdings of Early American coins. That sale is set for May 16 in New York City.