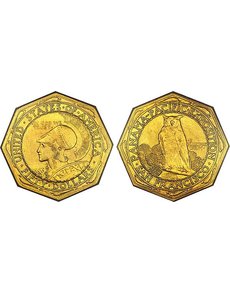 Gold crossed the $1,600 an ounce barrier for the first time in history July 18, establishing record price after record price as it approached that level.
Gold’s slow and steady rise this year continues upward, as Congress and the White House figure out how to raise the government’s debt ceiling before the United States’ credit rating drops, or perhaps worse, the country defaults on its current commitments.
True to form, gold coins continue to be the top lots at auction. During the Heritage auction at the July 7 to 8 Summer Florida United Numismatists convention in Orlando, 3,786 bidders competed for 5,865 lots and 97 percent were sold by lot, for a total of more than $11.2 million realized. A look at the top 25 lots of the Summer FUN auction is telling in that all but three are gold, the majority selling at levels on-par with comparable sales of the last several years.
Most popular are coins that many would consider safe and have broad appeal. Yet strength in the current market is not reserved for simply widely popular coins, as many coins that would be considered in the realm of specialists are bringing big money.
Eleven bidders competed for the top lot, a 1797 Capped Bust, Small Eagle, 16 Stars $5 half eagle graded About Uncirculated 53 that realized $132,250. The last comparable example to sell at public auction was an AU-58 example that realized $138,000 at a June 2010 Bowers and Merena auction.
Classic Proof U.S. gold has been extremely popular of late and a 1901 Coronet $20 double eagle graded Proof 65 Cameo sold for $77,625, in line with what at least three other similar coins have sold for in the past 12 months at auction.
If any coin in the U.S. market is “blue chip” it is the octagonal 1915-S $50 Panama-Pacific International Exposition $50 coin. It’s big, bold, flashy and available regularly, yet still very scarce with a mintage of just 645 pieces.
They are trophy coins, and their appearance says to others, “I’m an expensive coin.”
While these 1915-S coins were not spent for their $50 face value, their unusual shape and big size made them susceptible to polishing, rim dents, re-engraving and other abuses, and the cheapest examples start at $30,000.
The Summer FUN auction offered a Mint State 63 example that realized $74,750 — the same price that eight of the last 12 have realized when offered at public auction. Stability personified.
The upcoming American Numismatic Association convention in Rosemont, Ill., will be a further test of the market’s resilience and appetite for five- and six-figure gold coins as hundreds will be trading hands while dealers refresh their inventories. ¦