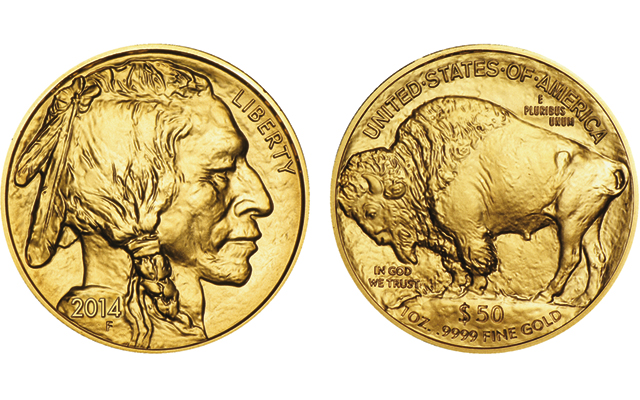 Sales by the U.S. Mint of 1-ounce gold American Buffalo coins for the first five months in 2014 are 49,000 coins fewer than were sold during the same period in 2013.

The United States Mint’s sales of American Buffalo 1-ounce .9999 fine gold $50 coins so far this year are down compared to the same sales period in 2013.

The American Buffalo gold coins are being sold at the same time as the U.S. Mint offers its top-selling 1-ounce .9167 fine American Eagle $50 gold coins.

The American Buffalo coin is .9999 fine, while the American Eagle is alloyed and slightly heavier — at 33.93 grams versus 31.1 grams. Both coins, however, contain the same amount of pure gold: 1 troy ounce.

Sales during that inaugural month reached 99,500 coins, with 117,500 coins sold during July 2006. The latter remains the highest sales month in the history of the series.

Calendar year 2006 remains the highest sales year with 323,000 coins from six and a half months of sales. Since 2006, the sales window when the coins were available has varied annually. Annual sales, with the number of sales months they were available in parentheses, follow:

The U.S. Mint does not sell its bullion coins directly to the public. The coins are sold through a network of authorized purchasers, who buy the coins based on the closing spot price of the metal on a given day, plus a premium. The coins are then resold to other dealers and/or the general public.