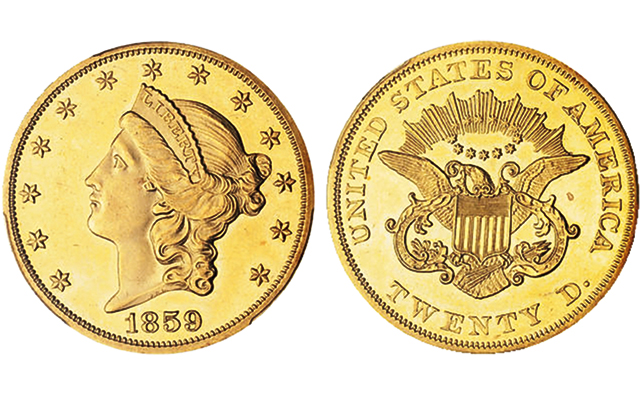 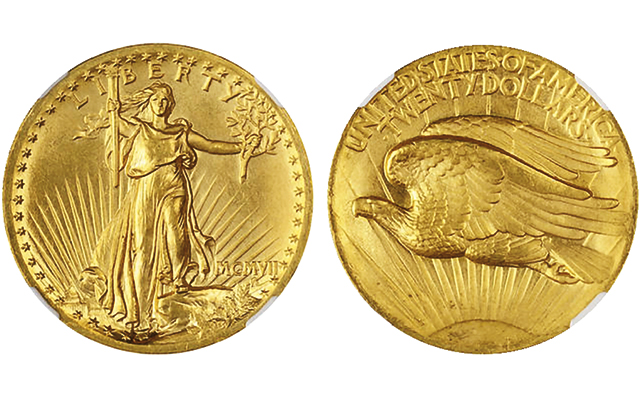 The auction was notable for its selection of gold U.S. coins including these two Proof $20 double eagles that both broke the $200,000 mark.

Among the coins that didn’t find a buyer was a 1921 Saint-Gaudens gold $20 double eagle graded About Uncirculated Details, Improperly Cleaned, by Numismatic Guaranty Corp. — one of perhaps 150, or so, known — that went unsold against an estimate of $80,000 to $90,000.

This is a rather mysterious issue in that the number of Proof Coronet double eagles minted in 1859 is unrecorded in Mint records. Researcher Walter Breen suggested that as many as 50 to 70 could have been produced, but many of these were probably melted. Likely fewer than 10 survive today, since the high face value of the double eagle kept all but the wealthiest collectors from obtaining — and keeping — them.

The 1907 Saint-Gaudens, High Relief, Roman Numerals double eagle, designed by Augustus Saint-Gaudens, is legendary for its beauty and is always popular with collectors.

Many consider it America’s most beautiful coin. Alas, the high relief made it impractical for mass production, and the relief was lowered in 1907.

Debate continues as to whether or not some 1907 High Relief double eagles that display a certain set of characteristics are Proofs. While Numismatic Guaranty Corp. recognizes High Relief Proofs, Professional Coin Grading Service does not.

??Extremely sharp details, both at the centers and toward the edges.

??No die erosion or distortion.

??Bold, raised die-polishing lines on both sides in a random, swirling pattern.

??A build-up of metal inside both borders, most notable on the obverse (quite possibly a result of the tremendous pressure exerted during multiple strikes on the hydraulic medal press).

Even the description acknowledges, “Many proofs look very much like their business-strike counterparts, and close examination is required to differentiate the two.” It adds, “There are no official mintage figures for Proofs and the origins of the coins are a mystery.”

NGC has recorded more than 250 submissions of Proof High Relief double eagles and, at Proof 67, this piece is among the finest graded by NGC. It sold for $222,300.