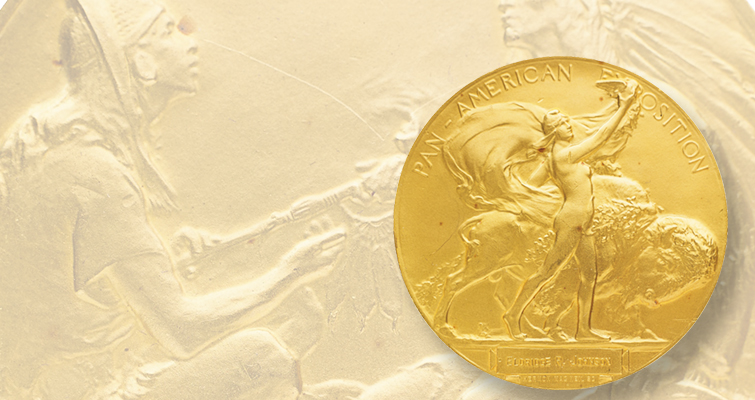 Rago Auctions will offer in its Feb. 24 auction what is believed to be one of just two 1901 Pan-American Exposition medals of this type struck in 24-karat gold. 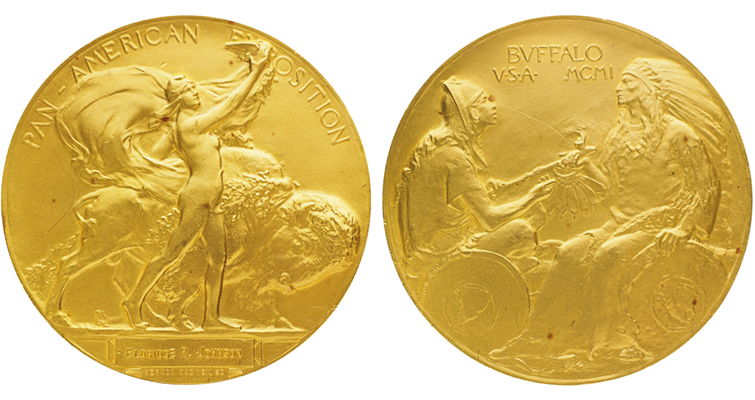 A rendition of a striding Liberty with a garlanded buffalo at her side graces the obverse of the 1901 Pan-American Exposition gold medal. 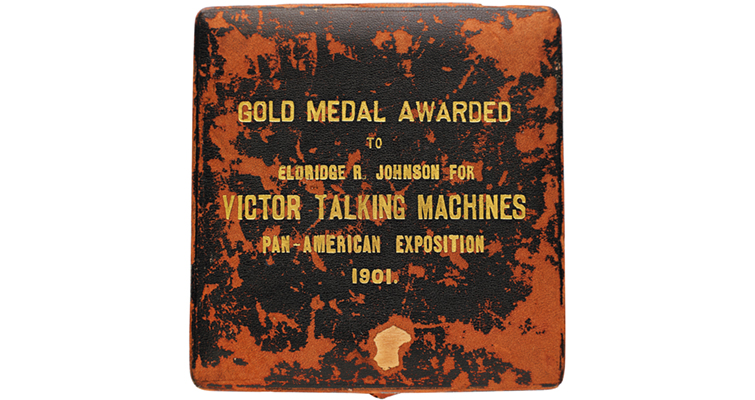 The gold medal is accompanied by the original presentation box from the manufacturer, Gorham Manufacturing Co.

One of possibly only two known 1901 Pan-American Exposition medals struck in gold and still in existence will be offered to collectors by Rago Auctions in its Feb. 24 sale.

Chris Wise, director of Coins/Currency and Silver for the Lambertville, N.J., firm, said the medal originated from an estate in New York.

The 64-millimeter medal is attributed as NY L-TM103 in Fred Lavin’s 2010 reference, Panorama of the Pan-Am.

The medal is inscribed incuse on the edge with the manufacturer’s name and gold fineness: GORHAM CO. 24K.

The exposition in Buffalo, N.Y., is tragically noted as the site of the Sept. 6, 1901, assassination of President William McKinley. McKinley died Sept. 14, eight days after being mortally wounded.

The obverse of the gold medal depicts a striding nude representing Liberty, alongside a garlanded buffalo. The reverse depicts two Native Americans, from South and North America, facing one another as they share a peace pipe.

The medal was designed and engraved by sculptor Hermon A. MacNeil, future designer of the Standing Liberty quarter dollar.

The obverse is inscribed PAN AMERICAN EXPOSITION above Liberty. Inscribed on a plaque below is ELDRIDGE R. JOHNSON to whom the medal was presented, with HERMON MACNEIL SC in the exergue.

The reverse is inscribed in the field above the two Indians in two lines BVFFALO / V•S•A• MCMI.

The medal is accompanied by its original presentation box from the Gorham Manufacturing Co. On its cover appears, in gold lettering, GOLD MEDAL AWARDED / TO / ELDRIDGE R. JOHNSON FOR / VICTOR TALKING MACHINES / PAN-AMERICAN EXPOSITION / 1901.

Johnson founded the Victor Talking Machine Co., which he turned into the leading producer in America of phonograph players and phonograph records.

New York professional numismatist Anthony Terranova said he examined a gold example of the medal a number of years ago, but it was not engraved with the name of a recipient. At the time he examined the gold medal, Terranova said it was owned by professional numismatist Jay Cline, a Standing Liberty quarter dollar specialist and author of the reference Standing Liberty Quarters.

Wise said as many as 10 of the medals may have been struck in gold.