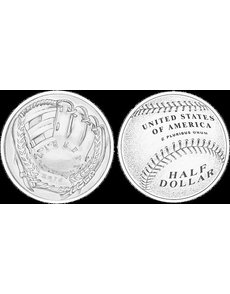 One of the baseball glove designs, submitted in 3-D format, showed a gold coin floating in space. But that was not the best design, CFA members agreed.

Alex Krieger, an architect member of the Commission of Fine Arts, said it was an easy call for next year’s set of baseball coins.

If the reverse is a baseball, then the obverse has to be a glove, he said.

And with that his four fellow commissioners at the July 18 meeting were in complete agreement on the obverse design for the 2014 coins honoring the National Baseball Hall of Fame. No debate and little discussion accompanied the decision.

The only question was in deciding between two designs that feature gloves for what will be the nation’s first concave/convex coins.

One of the baseball glove designs had been submitted to the U.S. Mint in 3-D format that showed a gold coin floating in space. But that was not the best design, the commission agreed.

So the five members unanimously recommended a design featuring a baseball glove whose artist declared it to be “a fundamental symbol for teamwork and camaraderie.”

Some commission members were not too happy with the wheat sheaves the artist had placed on the glove. Some feared, as did the National Baseball Hall of Fame, that the sheaves might appear to be excess lacing on the glove.

According to the narrative submitted by the designer for the recommended design, titled “A Hand Full of Gold,” the design was “Built upon the value of community, Baseball is the backbone of American culture. Raised loving the native pastime, a glove assisted me not only as a tool, but helped foster communication and trust between my family and peers. It is a fundamental symbol for teamwork and camaraderie. The shape of the glove also highlights the concavity of the coin. Two wheat sheaves unite with the braided lace of the glove to form a ring. This stands for American unity, stitched together to form one nation. The wheat celebrates a love for our bountiful land and home.”

Donald Everhart II, one of the Mint’s sculptor-engravers, assured the commission the Mint’s engravers would be allowed to make adjustments to the final design that include a review of the sheaves and the lettering of the word “Liberty” in the middle of the glove.

Yes, Mint officials told CFA member Elizabeth Meyer, a landscape architect from the University of Virginia, the designs were not as polished as those typically submitted by the Mint. Officials noted that the designs were the products of an open competition ordered by Congress for a three-coin set to honor baseball’s Hall of Fame and Museum in Cooperstown, N.Y.

The contest drew 178 entries. The design recommended by the CFA was submitted on the final day.

The rejected 3-D glove design, titled “Dad’s Baseball Glove,” was said by its designer to be one from the 1930s and 1940s and “just like the one that [his] father used when [they] played baseball together.”

In all, the Mint presented 16 finalist obverse designs for the commission to review for the gold $5 coin, silver dollar and copper-nickel clad half dollar coins in the set. Seventeen designs had originally been picked as finalists, but one was withdrawn because it did not meet all of the competition criteria, U.S. Mint spokesman Michael White said July 18.

Of the 26 semifinalist designs from which the finalists were chosen, White did not specify what criteria was not met nor which design was withdrawn.

The Citizens Coinage Advisory Committee will review the same designs at a July 23 meeting.

For the reverses of the set of three baseball coins, the CFA at its March 21 meeting urged a design that would place the inscription E PLURIBUS UNUM directly under the UNITED STATES OF AMERICA and in the same portion of the ball.

Treasury Secretary Jack Lew will pick the designs for the coins after considering the recommendations of two review groups and from the National Baseball Hall of Fame.

The Hall of Fame supports the design backed by the commission, but without the wheat sheaves.

All 16 finalist designs can be viewed online at http://batterup.challenge.gov/submissions. ¦