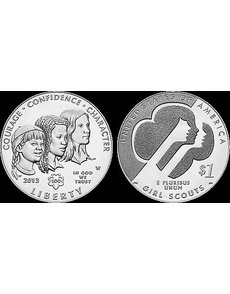 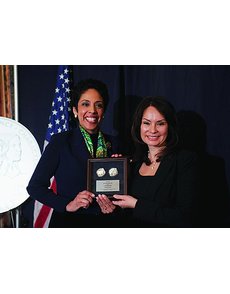 Image courtesy of the Girl Scouts of the USA.

With less than five full days of sales recorded, the United States Mint reports sales through March 4 of the 2013 Girl Scouts of the USA Centennial silver dollar reached 11.9 percent of the total maximum authorization.

The U.S. Mint sales report indicates 41,624 of the silver dollars were sold — 29,331 Proof coins and 12,293 Uncirculated dollars. The coins went on sale at introductory prices at noon Eastern Time Feb. 28.

The maximum combined mintage, in Proof and Uncirculated versions, is 350,000 coins, as authorized under Public Law 111-86, signed into law Oct. 29, 2009, by President Obama. The price of each coin carries a $10 surcharge. Net surcharges after the U.S. Mint recoups all production costs are to be paid to the Girl Scouts of the United States of America for Girl Scout program development and delivery.

The coins are being struck at the West Point Mint and carry the W Mint mark.

Joining Chávez and Rios were 17 Girl Scouts Gold Award recipients from around the country and more than 100 other leaders. The leadership breakfast brought together outstanding women and men from the public and private sectors and members of Girl Scouts Honorary Troop Capitol Hill, made up of all the female members of Congress.

Of the 17 Gold Award recipients, five were also recognized as 2013 Young Women of Distinction — girls who have earned the Gold Award and were selected by an external committee with representatives from leading nonprofit organizations, Girl Scout partners and funders.

Rios presented Chávez with a framed presentation display containing two Proof 2013-W Girl Scouts of the USA silver dollars oriented so an obverse of one and the reverse of the other can be seen simultaneously.

The coin’s obverse was designed by Barbara Fox, a self-employed artist, illustrator and designer, and master designer with the U.S. Mint’s Artistic Infusion Program. The design depicts three girls who represent the different ages and diversity of the Girl Scouts of the USA.

The reverse of the silver dollar was designed by AIP Master Designer Chris Costello, a professional graphic designer, illustrator and typographer. The design features a version of the iconic trefoil-with-profiles symbol of the Girl Scouts of the USA.

Costello’s designer’s initials, CTC, appear in the field up and to the left of the G in GIRL. Menna’s initials, JFM, appear below the numerical denomination.

Both the Commission of Fine Arts and Citizens Coinage Advisory Committee recommended to the Treasury secretary the designs that were eventually adopted.

Special texturing that appears on the main reverse design devices was computer-generated and imparted to the master die while it was being cut on a computerized numerical control milling machine, according to U.S. Mint spokesman Michael White. The master dies are then used to produce working hubs, which in turn are used to make working dies.

Customers should add $4.95 to all domestic orders for shipping and handling. There is no household order limit. ¦