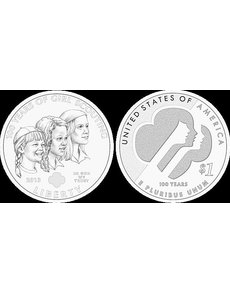 The Commission of Fine Arts is excited with their selection for the reverse of the 2013 Girl Scouts Centennial commemorative silver dollar. The panel praises the 3-D effects of the design, which incorporates silhouettes of Scouts amidst the organization’s trefoil logo. Also shown is the panel’s recommendation for the obverse, left. 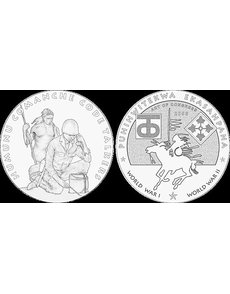 The Comanche Nation would get these designs for its code talkers medal if the CCAC’s recommendations are adopted. 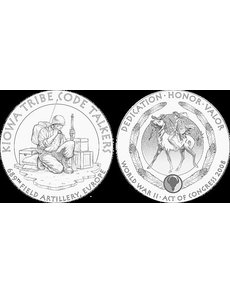 The Kiowa Tribe medal would show these designs if the Treasury secretary adopts the CCAC recommendations. 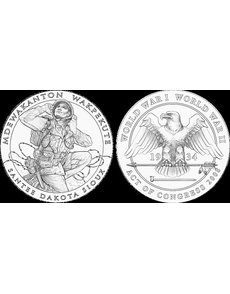 The CCAC recommends these designs for the Santee Dakota Sioux Tribe medal honoring the contributions of the tribe’s code talkers. 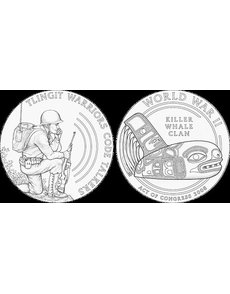 The committee urges that Tlingit Tribe Code Talkers be given a medal showing these designs.
Previous
Next

Members of the Citizens Coinage Advisory Committee have excitedly recommended designs for a Girl Scout commemorative silver dollar, saying the reverse could signal “a new American style” for the nation’s coins.

Meeting in Washington April 26, the panel recommended a design showing three Girl Scouts for the obverse of the 2013 dollar that will mark the organization’s centennial.

But it was the recommended reverse’s layered design of a Girl Scout service mark that wowed the committee and caused the panel to believe they had pushed the U.S. Mint’s artists into a more modern era of design that could become competitive with foreign coinage.

“Reverse No. 6 is exactly what we should be doing,” said Donald Scarinci, a New Jersey lawyer and medals specialist who has been highly critical of Mint designs in the past.

He need not have worried. The 10 committee members voted overwhelmingly to recommend the reverse to Treasury Secretary Timothy Geithner. He will have the final say on what designs are selected for the coin.
Under a voting scheme that allows each committee member to assign up to three points to a design, the panel gave 28 points to the reverse. Only two of the other nine reverse designs received any points.
What excited the committee was what one described as the likely “3-D effect” that Proof versions of the reverse would have.

Others compared the design to the 9-11 congressional medal and the recently issued Star Spangled Banner commemorative coins. This shows that the Mint is moving rapidly to use new coin production steps to create more modernist designs, said several members.

“I’m really excited about Design No. 6,” said sculptor Heidi Wastweet of Seattle, who said it would signal the start of a new American style.

“It’s a beautiful design,” said Stevens-Sollman, who was attending her first meeting as a committee member.

The recommended obverse design drew 22 points, outpolling two designs that each drew 15 points. One showed two Scouts, one in an early Girl Scout uniform and the other in a contemporary design with a 100th anniversary trefoil between them. The other design show a Senior Scout exchanging the Scout salute with a younger Scout she was directing.

Marks told the committee he had two goals when selecting art for commemorative coins. First “we pick beautiful art” for these coins, he said, and if the panel does that, the sponsoring organization will benefit more because the coins will sell better.

The committee suggested some changes to the placement of devices and inscriptions on the coin. It voted to remove the wording 100 YEARS from the reverse and substitute, for the current trefoil that is on the obverse, a centennial version bearing 100. The required E PLURIBUS UNUM wording would then be repositioned on the reverse, to where the 100 YEARS is currently located. The words “Girl Scouts” would then be placed at the rim where E PLURIBUS UNUM is in the current design.

The committee devoted most of its afternoon discussion to reviewing designs for four proposed congressional gold medals for four Native American tribes whose members served as code talkers for the military during World War I and World War II.

At a previous meeting, the committee had rejected the Mint’s initial plans for a common side for the 22 tribes that will be honored in the program. Instead, the CCAC said each tribe deserved a unique medal to honor its accomplishments, such as Congress had ordered for the Navajo Nation’s code talkers in 2001.
Marks and the committee praised the Mint for coming up with new designs and, with one exception, quickly endorsed the designs recommended by the four tribes for their medals.

The Comanche Nation would get an obverse design showing a design based on the Comanche Code and Spirit Talker monument in Lawton, Okla. It would show the “spirit talker” behind a radio talking soldier and be encircled by the words NUMUNU (People) and COMANCHE CODE TALKERS. The reverse would carry inscriptions in the native language along with the military patches of the Army units in which the Code Talkers served, having the Comanche tribal logo of a horse and rider.

The Kiowa Tribe medal would show a kneeling World War II soldier talking on a radio transmitter on the obverse. The reverse of their medal would show a warrior on horseback, taken from the tribal seal, and show a buffalo head and a circle of feathers.

The obverse of the Santee Dakota Sioux Tribe medal would show an infantryman with barbed wire in the background as he looks skyward. The recommended reverse of this medal was not one supported by the tribe, but the committee voted for a more stylish eagle designed by Mint artists. It did urge the Mint to consult with the specialists about the smoking pipe shown in the design.

The committee urged the Tlingit Tribe Code Talkers be given a medal showing a solider kneeling with a radio in hand. The reverse would show one of the tribe’s “Killer Whale” ceremonial hats with the wording KILLER WHALE CLAN. Semi-circles on the obverse and reverse of this medal would symbolize the coded messages being transmitted by the tribal members during World War II.

All the code talker designs will be shown to the Commission of Fine Arts at its May 17 meeting when the commission will also review the Girl Scout coin designs.

The CCAC returned to what has been a concern at earlier meetings, the background papers given Mint artist to help them prepare designs for the gold $10 coins in the First Spouse coin series.

Historian Michael A. Ross, an associate professor of history at the University of Maryland, has been highly critical of those papers, charging that they fail to paint a full portrait of the roles that many spouses have played.

That controversy resumed at the April 26 meeting as Ross and others critiqued the Mint’s latest paper.
Ross charged that the paper continues to portray the first ladies as “hostess or hobbyist,” offering only “very constricted, narrow view” of the spouses influence.

Michael Moran, a numismatic writer, echoed the same arguments, saying that the latest paper incorrectly says that Edith Roosevelt worked on “what is now known as the West Wing” of the White House and failed to mention her promotion of the arts at first lady.

Both Ross and Moran submitted papers backing their positions and Mint officials promised to forward them to the artists as they begin work on the coins to be issued in 2013.

Some members ridiculed the papers for noting that Ellen Axson Wilson, Woodrow Wilson’s first wife, had “insisted on the installation of women’s restrooms at public buildings and offices.” How could that be illustrated on a coin? Ross asked.

Ross also said the public was ready for a more critical discussion of the role of Edith Bolling Wilson, the president’s second wife. She guarded him after he suffered a stroke as president, playing a stronger hand in the White House than many of the sources the Mint typically uses would like to admit, Ross said. ¦