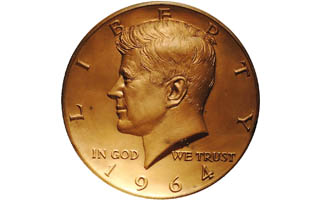 Three versions of the Kennedy half dollar to mark the 50th anniversary of the coin's debut will be issued in 2014 bearing Chief Mint Engraver Gilroy Roberts’ original portrait of Kennedy as introduced on the coin in 1964.

The designs of Roberts’ Kennedy portrait for the obverse and Assistant Mint Engraver Frank Gasparro’s Presidential Seal reverse have been modified over the years.

These three coins will be in issued in .9999 fine gold (with a 1964 – 2014 dual date), and in .900 fine silver and copper-nickel clad compositions (both with the standard 2014 date). The Proof Kennedy gold half dollar will be produced at the West Point Mint. The gold coins will be the same diameter and thickness as the silver and copper-nickel clad versions but will contain approximately 0.75 ounce of pure gold.