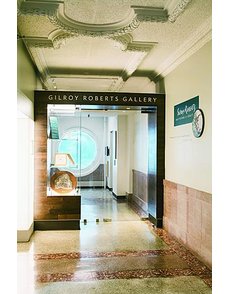 Behind the entrance to the Gilroy Roberts Gallery is a circular window having an ultraviolet-coated cover with the image of the Kennedy half dollar, visible from behind the glass. 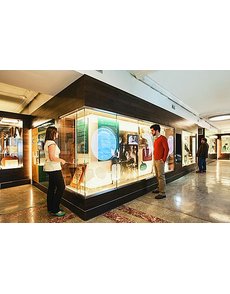 Visitors to the interactive exhibits can capture a glimpse of the works of the nation’s ninth chief engraver of the U.S. Mint. 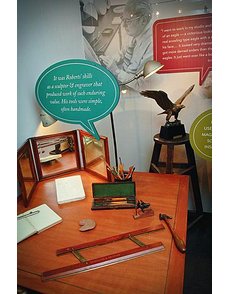 Diorama replicates Roberts’ work studio as it would have appeared in his Pennsylvania home. 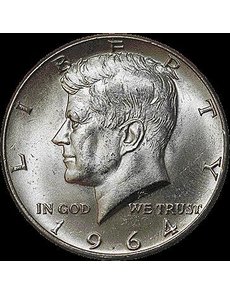 Gilroy Roberts’ medallic portrait of John F. Kennedy was adopted for use on the obverse of the Kennedy half dollar, first released in February 1964. 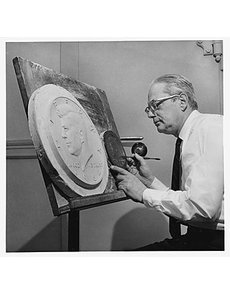 Gilroy Roberts’ medallic portrait of John F. Kennedy was adopted for use on the obverse of the Kennedy half dollar, first released in February 1964.

The Community College of Philadelphia marked the 50th anniversary of the assassination of President John F. Kennedy with the opening of an exhibit illustrating the life of Gilroy Roberts, the artist who designed and engraved the obverse of the Kennedy half dollar.

The Nov. 22 activities at the college included a Day of Remembrance ceremony.

Following the brief ceremony, the 1,000-square-foot Gilroy Roberts Gallery opened to the public in the Rotunda of the facility at 1700 Spring Garden St. that once served as the third Philadelphia Mint. The gallery houses the new exhibit, titled “Gilroy Roberts: Mastering the Craft.”

The third Philadelphia Mint struck hundreds of millions of the 1964 Kennedy silver half dollars.

Guests were invited to write down how they intend to respond in 2013 to Kennedy’s call to action.

The remembrance pledges will be placed on a wall and later added to the college’s historic archives, according to college officials.

The Gilroy Roberts exhibit was made possible by the Gilroy and Lillian P. Roberts Foundation’s $1.02 million gift to the Community College of Philadelphia in 2012.

Roberts served as the ninth chief engraver of the United States Mint from 1948 until 1964, when he left to direct the engraving department of the fledgling Franklin Mint.

For many collectors, perhaps, Roberts’ best known works are his portraits of Kennedy.

The portrait was paired on the half dollar with Assistant Mint Engraver Frank Gasparro’s treatment of the presidential seal that Gasparro had created for the reverse of the same Kennedy presidential medal.

Intended as a memorial to the assassinated president, the half dollar was authorized by Congress just over a month after his Nov. 22, 1963, death.

Use of Roberts’ existing medallic portrait of Kennedy and Gasparro’s accompanying medal reverse accommodated the quick preparation of models, hubs and dies.

Striking of the new coins began in January 1964; the coins first entered circulation the following month.

Gasparro succeeded Roberts as chief engraver when Gasparro was appointed to the post Feb. 11, 1965, by President Lyndon B. Johnson.

The interactive exhibit in the Gilroy Roberts Gallery at the Community College of Philadelphia includes sculpturing tools, among them some homemade items, in addition to drawings, medals and coins.

When the College is open, members of the public can tour the free exhibit from 8 a.m. to 8 p.m., Monday through Thursday.

The gallery showcases a diorama replication of Roberts’ artist studio once located at his Newtown Square, Pa., home.

? The Anatomy of a Coin: An interactive station where visitors explore the elements of the 1964 Kennedy half dollar and learn interesting historic facts related to its design.

? An introduction to Gilroy Roberts Video Experience: Coin collectors and Gilroy Roberts admirers can gain insight into the man and his life by listening to the artist’s own words. Roberts was the first chief engraver for the U.S. Mint to resign from the position, rather than die in office.

? The Art of Coining Video Experience: Visitors view a short video depicting the minting of U.S. coins at the third Philadelphia Mint, followed by a short captioned sideshow of historic images. The circa 1940 video can be seen online at www.youtube.com/watch?v=mBjD9N1APsw.

The college’s architecture students contributed major design elements, including the ultraviolet window overlay, imprinted with the Kennedy half dollar design, that covers circular windows and protects the artifacts from damage from sunlight.

Before Roberts’ death at age 86 on Jan. 26, 1992, the Gilroy and Lillian P. Roberts Charitable Foundation arranged for the American Numismatic Association to receive on permanent loan for extended exhibit a re-creation of his studio containing personal sculpturing and related items. A series of traveling exhibits also were created using items from Roberts’ collection.

The Roberts exhibit at the ANA was dedicated on the opening day of the ANA Summer Seminar in July 1991. The ANA exhibit replicated what Roberts’ basement office and studio looked like at the time of his death.

The exhibit was taken down in late 2000 or early 2001 while ANA headquarters underwent extensive renovations, and was never reassembled.

Several years later, the Roberts items, with the intervention of the Roberts Foundation, were moved from the ANA to storage at Temple University with the intention of being displayed in a gallery at the university’s Tyler School of Art. Despite an initial gift of $500,000 to Temple to support the exhibit, the promised space was never incorporated in the art school’s design.

In 2011, the Roberts Foundation sought and received the return of the $500,000 gift, for eventual placement with the Community College of Philadelphia. ¦