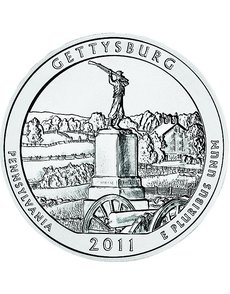 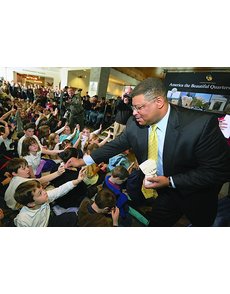 B. B. Craig, director for marketing at the U.S. Mint, hands out Gettysburg National Military Park quarters, the sixth in the U.S. Mint's America the Beautiful Quarters program, to children after a ceremony to mark the quarter's release Tuesday, Jan. 25, 2011 at the park's Museum and Visitor Center. Children in attendance received a new quarter and many adult attendees swapped their cash for rolls of the new quarter.

“The America the Beautiful Quarters Program connects America to our national parks, forests, fish and wildlife refuges, and other national sites,” Craig said. “The Gettysburg National Military Park quarter commemorates the pivotal battle fought here in the American Civil War, and it recognizes Gettysburg’s special place among our revered and protected national treasures.”

Added Kirby, “We are happy to be honored with this beautiful quarter. The coin can be a daily reminder of the sacrifices made at Gettysburg and a great way to start a conversation about national parks, national heritage and the 150th anniversary of the American Civil War.”

The crowd attending the coin launch ceremony was estimated at 1,600, which included 300 students.

Following the ceremony, M & T Bank in Gettysburg sponsored a coin exchange during which the public could exchange their cash for $10 rolls of the Gettysburg National Military Park America the Beautiful Quarter at face value.

For each pass through the line, purchasers were able to exchange cash for a minimum of one 40-coin roll of 2011-P circulation-quality quarter dollars struck at the Philadelphia Mint to a maximum of 10 rolls, while supplies lasted.

The coin’s reverse design depicts the 72nd Pennsylvania Infantry Monument, located on the battle line of the Union Army at Cemetery Ridge.

The Battle of Gettysburg, the Union victory in the summer of 1863 that ended Confederate Gen. Robert E. Lee’s second and most ambitious invasion of the North, was a turning point in the Civil War. Often referred to as the “High Water Mark of the Confederacy,” it was among the war’s bloodiest battles. It also provided President Abraham Lincoln with the setting for his most famous speech, the Gettysburg Address, given on Nov. 19, 1863, at the dedication of a military cemetery at the battlefield.

Established by concerned citizens in 1864, the Gettysburg Battlefield Memorial Association set out to preserve portions of the battlefield as a memorial to the Union troops that fought in the battle. In 1895, the land was transferred to the federal government and Gettysburg National Military Park was established.

The Gettysburg National Military Park quarter dollar is the sixth release in the 12-year America the Beautiful coin program to honor 56 national parks and other national sites representing the 50 states, the District of Columbia, and the five U.S. territories — Commonwealth of Puerto Rico, Guam, American Samoa, U.S. Virgin Islands and Commonwealth of Northern Mariana Islands.

The United States Mint will issue these quarters in the order in which the honored site was first established as a national site.

Two-roll sets and 100-coin bags of circulation-quality Gettysburg National Military Park quarter dollars from both the Philadelphia and Denver Mints were placed on sale by the U.S. Mint at noon Eastern Time Jan. 27.